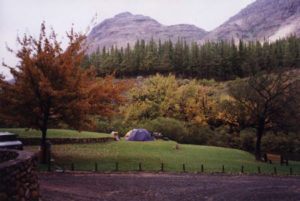 Our lone tent at Algeria campsite

The Cederberg is probably my favourite wilderness area.  Little can compare to the remoteness,
the silence and timelessness of those mountains.  Ron and I resolved to tackle one of the classic wilderness routes – Algeria to Wuppertal, by  way of Crystal Pools. However, the threatening wild weather and our unfamiliarity with the route to Wuppertal, tempered our enthusiasm, and we decided to walk up to Crystal Pools via Middelberg, and then circle back via Sleepad and Uitkyk Pass.

The rain bucketed down on Friday night as we slipped into a deserted Algeria.

The only way to unpack the vehicle was to decamp straight into the ablution block. Later, as the weather cleared, we pitched the tents.

I had packed in such a rush that I forgot most things, including ALL my food (left on the kitchen table). Things were not starting well…

However, Saturday was one of those pristine winter’s days that only the Cape can conjure up – diamond light under azure sky. The route was long and strenuous, but the places were remote and beautiful, and water was coursing down every stream and seeping out of every rock. Often we surprised small families of klipspringers, getting to within tens of paces of them before they bounded up the rocky slopes in panic.  We passed through groves of threatened Clanwilliam Cedar, remnants of once great forests – a sad commentary on the mindlessness of humankind.

Crystal Pools is a suspended amphitheatre through which a stream runs, but it wasn’t warm enough for a dip.

A much-quoted guide book informed us that the old forester/ranger hut no longer existed, but we found it on the ridge north of the amphitheatre about an hour before sundown. It’s not much more than a “stable” with grass on the floor, but it sheltered us from the rising wind.

On Sunday the north wind blew icily, but the sun was out, and we made it back to Algeria at 16h30. Except for a small party who arrived at the hut at sunset, we had not seen another soul.

My lack of rations had not been a problem: Big Ron, true to his philosophy of not going hungry on trail, had packed so much that we both lived off his rations for 2 days – and then he still carried plenty out!

The hut near Crystal Pools