Our judgement impaired by a few beers and a bottle of red wine over dinner one night in the Strand, Ron, Peter and I resolved to try the Cederberg Traverse from Wuppertal to Algeria again – in the heat of December (a previous attempt was curtailed). 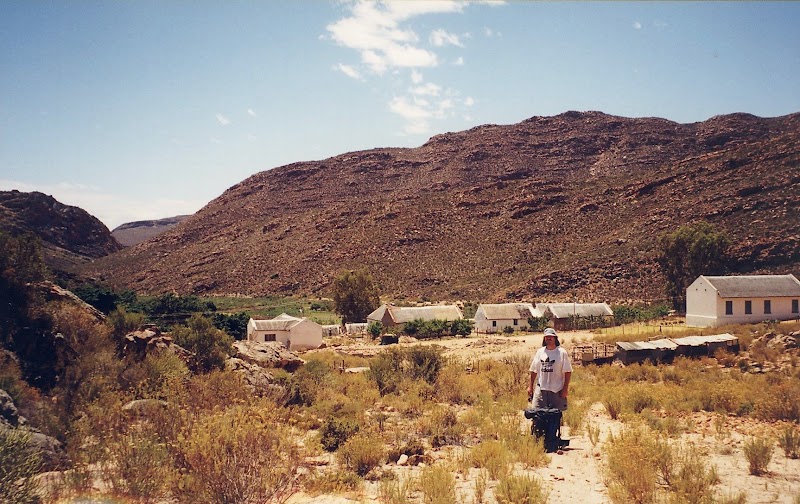 This time we got the logistics right. Deon, a friend who enjoys bush cooking, was appointed “base camp manager” and would run the shuttle service to drop us at Wuppertal. However, we underestimated the time required to drive there from Algeria, and consequently only set out into the Dassieboskloof at 10h00.  It was already hot – into the mid-30s.

It seems the locals have misguidedly spray painted the names of features and path markings on most available rocks for the first 5km of the path. This, allied to the fact that power lines and water pipes, and not a little litter, mark the path, make the sector less than a “wilderness” experience. 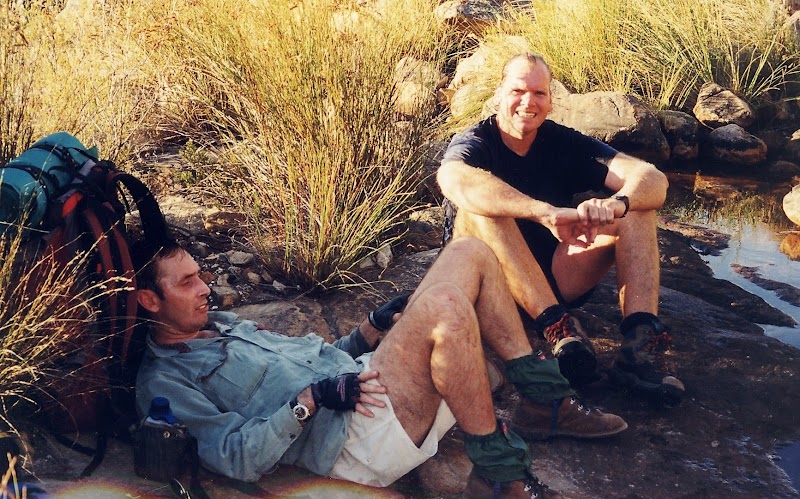 Later that morning we shuffled into a “buite-stasie” of the Wuppertal mission called Kleinvlei, a quaint hamlet of about 10 houses and subsistence farming. Surprisingly, we were able to buy ice-cold Cokes. A friendly chat with the local women revealed that the most populous family in Kleinvlei is the Zimmeries clan. My comment that the name sounded German triggered much mirth, as the locals confirmed that an Oupa had always reminded those who would listen that “they were Germans”. Apparently, the Moravian missionaries had indulged in some over-enthusiastic conversion of the Khoi-Khoi…

Our contour map (dated 1981) shows the path up the Dassieboskloof to continue through Kleinvlei, when in fact it snakes up a kloof to the left, away from Kleinvlei, and then veers right to enter Dassieboskloof high on the left slopes. The locals pointed out where the path runs, but graciously allowed us to overrule them when we insisted we had to go up Dassieboskloof. Big mistake. 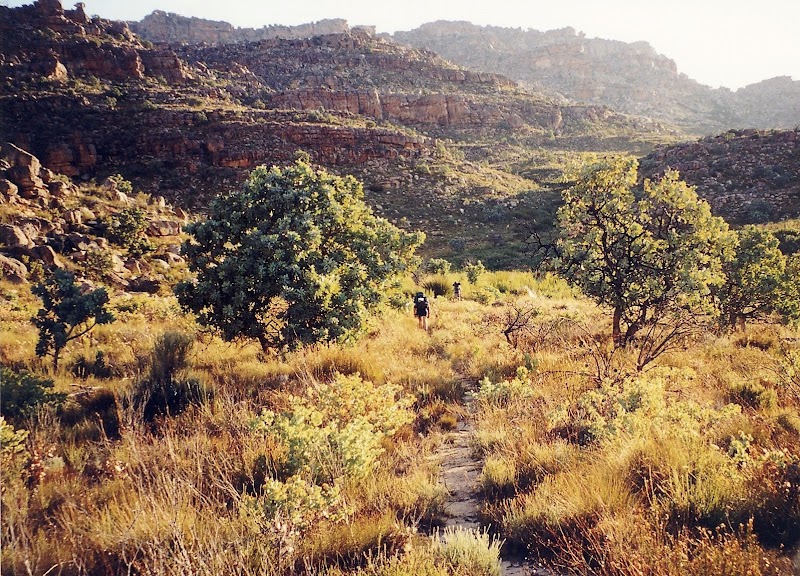 Little Mario and his gang were appointed to guide us up the river. The route quickly became a kloofing expedition, but the rock pools were fantastic. However, we realised that there was no path anymore and we began to doubt our map-reading abilities. The only thing to do was to climb the steep wall of the gorge until we hit the path, but by now the sun was beating down. I promptly lost my Game-filled waterbottle as we scrambled over large boulders, so I had to tackle the climb without it. The climb was an ordeal. The rocks were too hot to touch and the heat was something else. Eventually we dragged our exhausted bodies into some shade, but we knew we still had about 10km to cover to Crystal Pools. While we tried to recover, we wondered where the path was, only to find, when we finally staggered to our feet, that it was 5m away from our resting place!

The path continued upward in merciless sunshine. Eventually we decided, as heat exhaustion started to kick in, to rest in some shade until about 16h00, and then walk until sunset (about 20h00). This was a better decision than the one at Kleinvlei, and probably saved the hike for us. Although, it didn’t feel much cooler, we soldiered on up the interminable Vogelsang valley, crossing a number of vlei‘s and streams. We were aiming for the tree and swimming hole near Turret Ridge, having realised that we probably wouldn’t make Crystal Pools in our condition. However, when night fell we found ourselves near the headwaters of the Sand River, still some way short of our destination. A meal, tea, custard and an incomparable view of the night sky restored us, and I enjoyed my best night’s sleep ever on a hike. 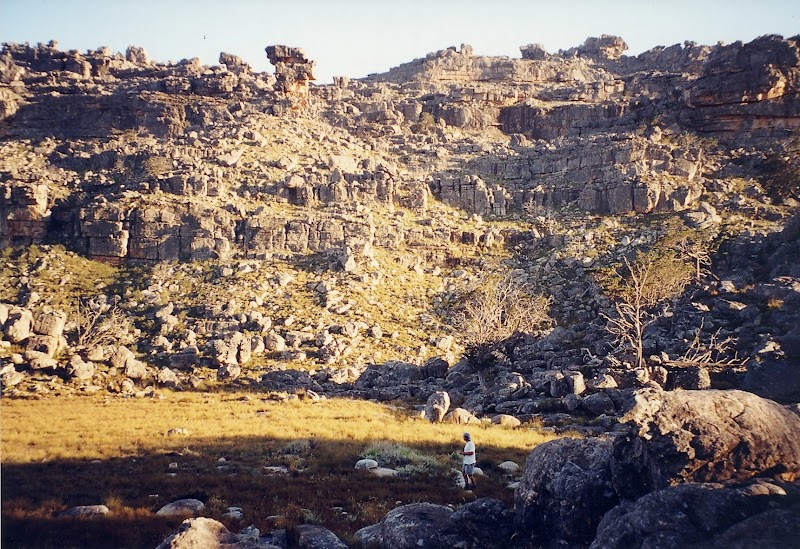 Soon after first light we set out again, determined to cover as much ground as possible before the heat took its toll. The cedar tree and the swimming hole, our goal of yesterday, looked idyllic – we will be back to spend time there. There followed a wonderful meander up the lower reaches of Engelsmanskloof. This is surely the one of the most beautiful parts of the Cederberg – sandstone castles and old cedars, valley meadows and sparkling streams.

After a great swim and breakfast at Crystal Pools we set out for Middelberg, down Groot Hartseer, across Grootlandsvlakte, where two mounted rangers – one known to us through our annual cedar-planting efforts with the Cederberg Conservation Group – passed us. We continued up to Geelvlei and Cathedral Rocks and then dropped down to the basin where the Middelberg huts nestle. It was still early afternoon and we believed Algeria was only a short downhill away, so we leisurely savoured lunch under the oaks next to the stream. At this point Peter rediscovered his sunglasses in his rucksack, which he had packed in for the previous expedition at Boosmansbos, and then ‘lost’. I suppose one way of preparing for a hike is to leave the rucksack packed… 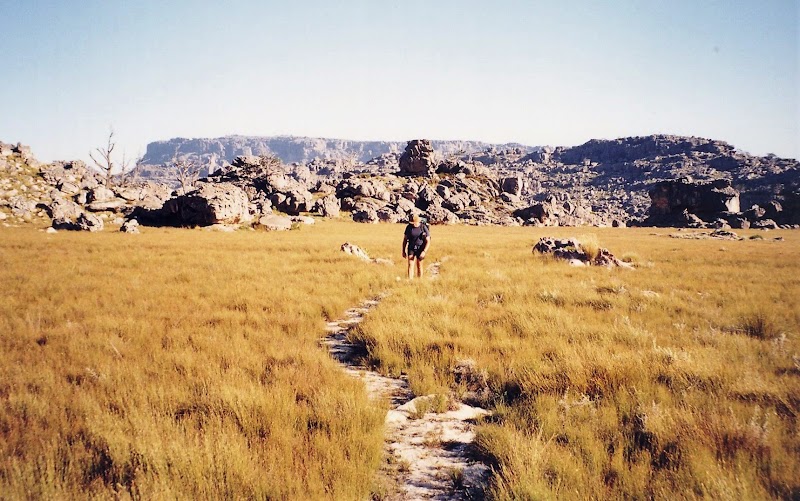 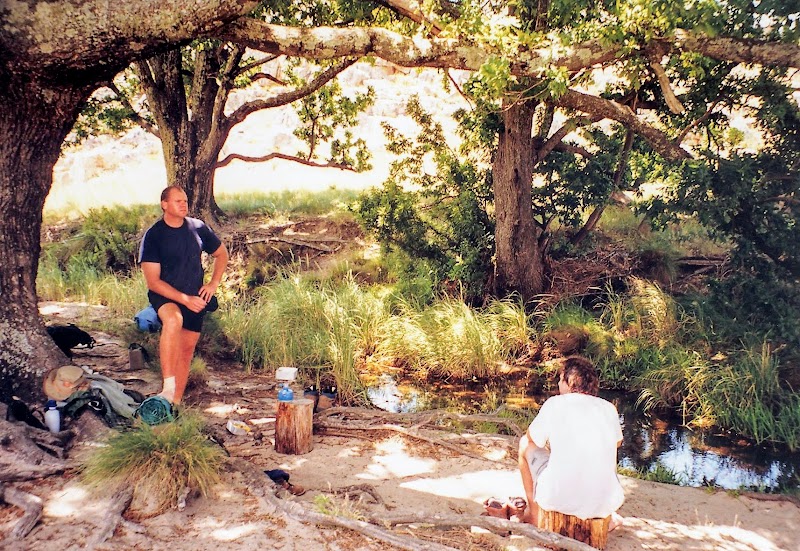 Algeria wasn’t a mere downhill away. As we breasted the valley rim, the heat rising out of the valley hit us like a blowtorch. Although we could see the green of the campsite as we zig-zagged down the shadeless slope, we never seemed to get closer, and the lower we got, the hotter the path became. Eventually, at the end of our tether, we staggered into Algeria, attracting uncomprehending stares from the holiday-makers, and fell into the pool.

It was only in the bakkie on the road back home that we realised the Cape was in the grip of a heatwave, and that temperatures had edged into the 40’s.

I think we will spend the summer months windsurfing, and leave the hikes for autumn…