2 – 15 July 2001
Machaba is located on the north bank of the Khwai River in riverine forest, with its tents fronting the river across from the Moremi Game Reserve. The area is rich in game, a veritable menagerie, and the birdlife is particularly prolific. Marion especially enjoyed Machaba because of the greater bushveld ambience, and we regret not being able to spend more than one night here.

Here we met up again with Harry and Patrik from Switzerland. Harry was the only other guest willing to risk a night game walk with us, in the company of Bruce, the manager, and Clifford, the pilot. This was a new experience for us: we have done a few wilderness trails in Kruger, but always the rangers have made certain of reaching camp before nightfall – at least not on foot. But Bruce, a Zimbabwean who follows every observation with a chuckle as if life in the bush is one long, wondrous giggle, suggested a game walk under the full moon. At first we didn’t quite believe him, and when everyone realised he was serious, the group rapidly shrank in size. We got going at about ten o’clock, the sand track a dull white ribbon through the silent bush. It was exciting; the bush silent, foreboding; every sense straining. Every now and then a pair of eyes would appear and Bruce would illuminate the animal with his flashlight. We saw nothing more than a hare and an owl. But we had seen a group of five lions earlier on the game drive, including three juveniles with rather naughty faces, so the adrenaline surged at every unusual sound. Predators hunt at night, don’t they? 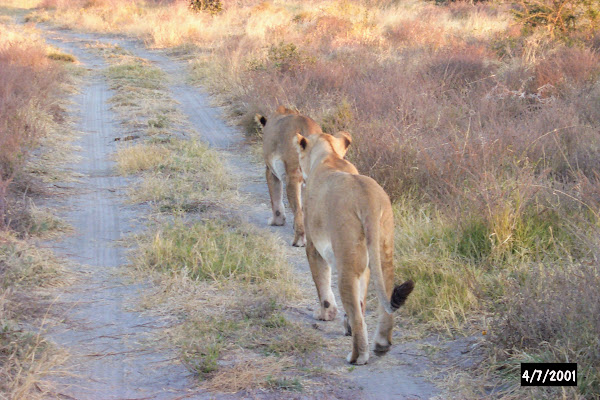 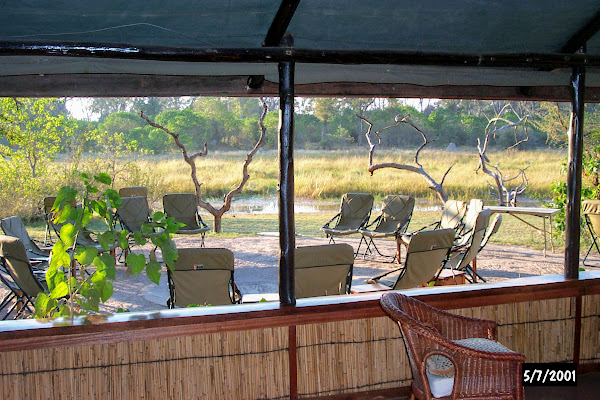 Woken the next morning by the incredible diversity of bird calls, we drove to the landing strip for our flight to Kasane. This time we flew higher, out of the turbulence, and it was interesting to see the sand ridge of the Mababe Depression and the Savuti Marsh from the air. I was rather chuffed with myself at being able to recognise these features without benefit of a map, having driven through the areas in 1996.