The Sweni is one of the most sought-after wilderness trails in Kruger, primarily because of the likelihood of running into the Sweni lions. According to James, the trails ranger, Sweni has the highest concentration of lion per sq km in Africa (i.e. the world). So when I got the chance to book all 8 beds, I took it – and took my whole family and some of my in-laws. FAQ

We renewed acquaintances with old trail friends: James Steyn (with whom we walked the Napi), Kallie Ubisi (formerly of Wolhuter), and James Mathebula (who cooked on Wolhuter). The next morning we tried to track the lions we had been hearing since 3am. We got very close, hearing the calls and growls of at least 2 groups, to left and right, as we snaked into the misty savannah. But the mist defeated us as we followed their fresh spoor, stretching away from us to the south. Snacks on Bravo Koppie.

The ultimate afternoon walk! A pride of lions finishing off the last of last night’s giraffe kill, took flight as we approached on foot. The females are massive cats. Vultures and about 8 jackals descended on the skeleton, picking it clean in efficient silence. Behind us about 8 hyaena loped tentatively closer, sniffing the breeze. They would approach the carcass passing within metres of us and ignoring us as if we weren’t 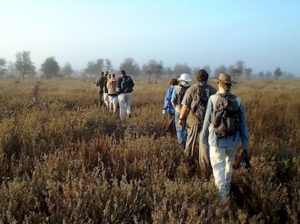 Sweni walk at sunrise in the mist

there, then would back off as they smelled the pride disappearing rapidly upwind. Then they finally moved in, each one claiming a portion of skeleton: a backbone here, a femur there; two spent time dismantling the ribcage. All this in absolute silence while we watched from about 75 m away. Vultures, jackals and hyaena operating as a team of sanitation workers – no fuss, no wasted effort. “This is what makes Sweni special”, whispered James, referring to the rare opportunity to watch lions on a kill while on foot. As we left the scene the riverine bush was alive with nervous wildlife.

On the Louis Trichardt road one evening a young female elephant charged us as we drove to the cliffs for sundowners. Accompanied by two other young females and a baby, she kept coming as we managed to get the vehicle past her. The others and the baby joined in, chasing us up the road with much trumpeting and bravado. The funny part was the baby’s eventual enthusiastic participation in the rout, trunk and tail extended for and aft, and its shrill, adolescent trumpeting. But that mommy elly meant business….