The route to Slanghoek Peak curves south and east up the Witte River valley. 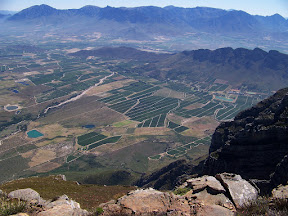 A fairly level and scenic walk from the car park at Eerste Tol on Bainskloof Pass of 12.5 km to a saddle below Slanghoek on Mountain Club property, known as Springstygbeugel1, almost traverses the Limietberg range from west to east. The MCSA party of which I was part camped on the saddle on Saturday night. We tackled the ascent early the next morning in cool but sunny conditions, and later returned to the car park after a round trip of 29.7km (including a few detours). The hike goes through an elevation of about 1100m and rewards you with cool pools and stunning vistas. A Google Earth track of the hike and photos follow.

If the 3D map and track above doesn’t work for you, download the kmz file and view in Google Earth.

From Slanghoek Peak we could see the smoke from the Du Toitskloof wildfire which the VWS crews had been fighting during the week, as well as a flare up below the peak. Soon after we left the peak an SMS calling a crew out to Slanghoek buzzed on my iphone. So I was almost “on the fireline”, but useless…  On some of the photos below the smoke and haze from the fires can clearly be seen. 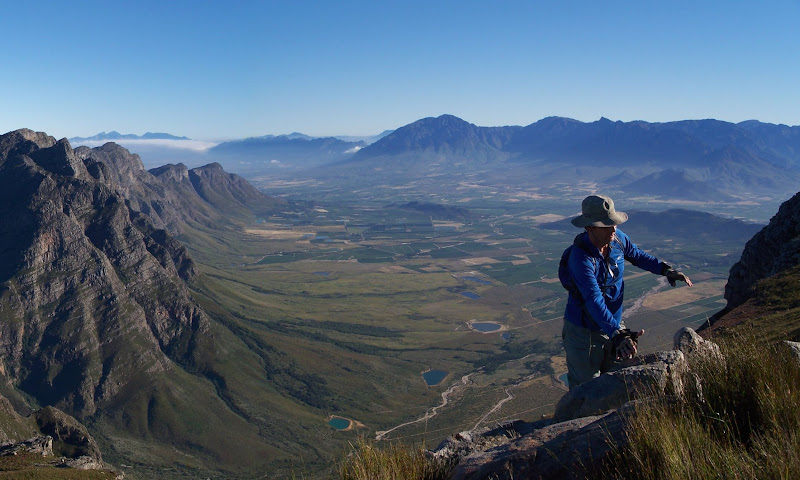 Bainskloof and the Witte River are rich in historical stories. One such story2 was related to us by a hiking club member who we met early on in the hike, a story about the “spookhuis”, Wolkerus, and how it came to be built by one Mr Hugo of Wellington, a jam magnate, and acquired notoriety in the ’70s (see waypoint for “Wolkerus” on the 3D map). The quote below comes from this excellent resource about Wolkerus: Anyway, Mr Hugo developed this notion to build a house in the mountains of Bainskloof. He had this road built that you are walking on and built the house in the 1940’s, complete with swimming pool. Unsurprisingly his wife refused to go and live there. Mr Hugo died before he could move into his house and so the house stood empty for 8 years until it burnt down in a veld fire in 1949. Mr Hugo must have died a sad man.  I can clearly remember as a child the “spookhuis” (Ghost house) standing there hauntingly high up in the mountains. Only some walls and the gable ends were still standing at the time. You can imagine what spooky images were conjured up in a child’s mind. Sadly an escaped convict murdered two hikers there in 1978 and the ruins were demolished to the foundations, so all that is left is what you see today.