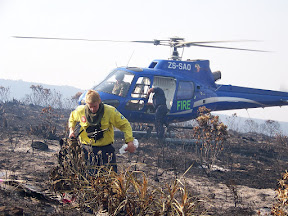 The latest fire that swept through the Kogelberg Biosphere Reserve last week was nothing short of disastrous. Young veld burnt again and all the eleven-year old veld has been destroyed, so that, in the words of a nature conservation official, “everything between Kleinmond and Paarl” is uniformly less than 3 years old. For biodiversity in Kogelberg, which is not known as “the jewel of the Cape Floral Kingdom” for nothing, this is potentially disastrous as the floral mosaic that ensures diversity has gone, and it means that recently fires have been occurring too frequently. Most of these fires are caused by humans, deliberately or otherwise.

On Saturday I was part of a Volunteer Wildfire Services (VWS) Jonkershoek crew that responded to the fire call-out. We were deployed to Kleinmond and waited there until 4:30 pm before being airlifted, along with the local CapeNature firefighting team, to the peak above Heuningklip. The fire, which had orginally started near Kleinmond and swept north-west through Kogelberg to reach the coast between Rooiels and Kogel Bay, was backing up down to Kleinmond again as the wind clocked around. See the Google Earth track of our fire-fight and photos below.

Or download the kmz file for viewing in Google Earth

When I saw the fireline, I wondered what chance we had. 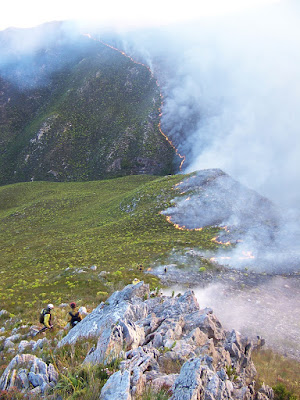 The fireline down to the kloof and up the other side. Click for larger sizes.

It ran east-west from the peak east of Kleinmond, down into a deep ravine north of Heuningklip farm, and up the other side, and was creeping southward towards the town.

Anyway we worked our way south from the LZ and then started to fight the fire down a ridge to the kloof. The CapeNature team was phenomenal. They hit that fireline like Dervishes. With the help of the chopper we had the fire out down to the kloof in about 1.5 hours, a distance of some 2 km. The pilot of the Eurocopter Squirrel

was an ace. In windless conditions he put out scores of metres of fire with each run, whereupon the combined CapeNature and VWS teams would suppress another section below that. The VWS team learnt a lot about effective beating and teamwork I think.

Next time you see a scrawny little guy in thick, orangy gear with a beater over his shoulder, give him respect. He’s a CapeNature firefighter. These guys have been on duty

every second day for four weeks now, fighting fires through the night. And they’re damned good at it. Absolute machines and proud of what they do. If it wasn’t for them the Cape Floral Kingdom would be more of a charred wreck than what it is today. I admire these guys and all the other people that do this thankless job for a living – unreservedly. 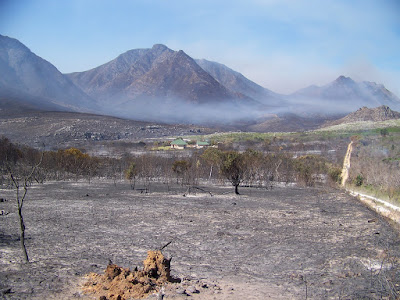 What’s left of the area around the Palmiet

The long isolation of the Kogelberg area has helped to protect its floral wealth and keep it clear of alien vegetation, and today the reserve represents perhaps the finest example of mountain fynbos in the western Cape. It has a species list of 1 654 plant species, of which about 150 are endemic. Many spectacular members of the protea family occur in the reserve. 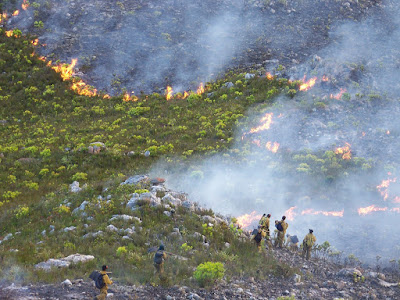 CapeNature team on the fireline

As the VWS prepared to withdraw from the bottom of the kloof, the CapeNature team fought the fire up the opposite slope and disappeared into the night, their headlamps bobbing after the crackling flames. There was a mild scare as we bundu-bashed our way through really thick, tall bush down the kloof to our vehicles when we noticed a flare-up behind us. If it followed us with any speed we would be facing a big problem, 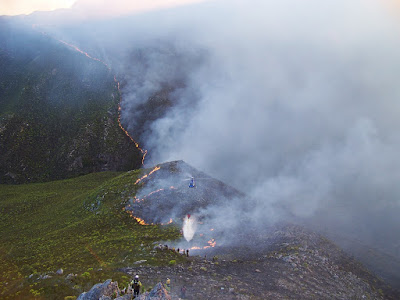 Chopper does its thing

but we were relieved to see it race up the opposite side of the kloof. However, the fire was now below the CapeNature team, undoing their hard work. We understood later that they may have lost the line because they had to backtrack.

Back at Incident Control we were able to enjoy water and food prepared by some unknown samaritans, while all the time wondering how the other team was doing as we surveyed the fiery mountainside. Eventually we were deployed to the golf course to assist the fire and rescue tenders as they stopped the approaching wall of flame short of some powerlines and the fairways. While there we noticed some wonderful people rescuing the small fauna that was fleeing out of the fynbos, including tortoises and chameleons, and lent a hand. I was happy to find and rescue an adult tortoise from an awful death. But I couldn’t help thinking of all the many thousands of small creatures that met their end over these days.

There was a tragic corollary to this story when an exhausted fireman was killed after he took a nap in front of his tender and was accidentally run over by his comrades at the golf course. Terribly tragic with so many other dangers about. 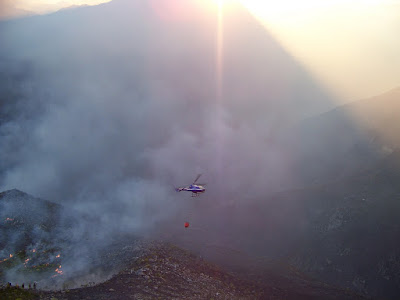 The Squirrel wheels away