Franschhoek to Jonkershoek via Assegaaiboschkloof 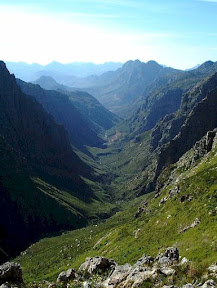 The mountain club’s plan was to walk from Franschhoek to Jonkershoek along the watershed via Emerald Dome and Victoria Peak. We would ascend Fortsnek and cross Noordkloofpiek, the scene of last year’s firefighting. It promised to be a long, hard, but spectacular, day. But an unseasonal south-easter raged through the night and clouded in the peaks, so we decided to follow the upper Berg River above the dam, up Assegaaiboschkloof to Bergriviersnek. The path has been recently maintained and is in excellent condition, except for the lower section which scramblers have obviously been using. A Google Earth track and photos follow …

As we breasted Bergriviersnek, we spotted smoke beyond the next range, obviously on the Helderberg. Within minutes it became a massive, mushrooming cloud. Soon the fire alert pinged on our ‘phones, scrambling the VWS standby crew. That fire would raze a number of houses and a hotel on Helderberg’s slopes.

Approaching Bergriviersnek, the source of the Berg River

21.9 kms  after starting out we trudged into the tearoom at Jonkershoek’s gate and sank a well-earned ale.