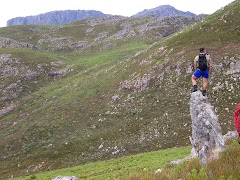 In typical MCSA Stellenbosch style: a couple of koppies (little hills) on this uitstappie (outing). The numbers tell the story:

The party of 19 enjoyed really spectacular views though in a section of the mountains south of Wemmershoek that I have never been to. We hiked from near the La Motte wine estate, over Suikerboskop and Du Toitskop to Mont Rochelle Nature Reserve and the pass. Mont Rochelle is familiar however, as the VWS fought a fire there a couple of months ago (the chopper LZ’s are shown on the Google Earth map) and it was good to see that the fireline we fought so hard to secure, held.

Our slow progress is largely explained by the fact that the first part of the hike, from La Motte up to Du Toitskop, features no paths to speak of. Any trails that exist occur in the Mont Rochelle reserve from the pass up to Du Toitskop and to the Wemmershoek lookout point – and these well-marked circular trails are what the weekend hiker should enjoy (permits are obtainable from the Franschhoek tourism office).
Or download the kmz file to view in Google Earth
The fynbos is fairly young here, about 3 to 5 year-old veld I would guess, but north of Suikerboskop, there is serious infestation by Hakea sericea,  an invasive weed. To my untrained eye it looks as if a weevil is attacking the fruit – biological control. But there are a lot of young trees growing in this area. The suikerbos is waist high at the moment, so the hakea is accessible if you’re interested in alien hacking, but in a couple of seasons time they will be difficult to spot in the thick bush. The area of infestation is marked on the map. 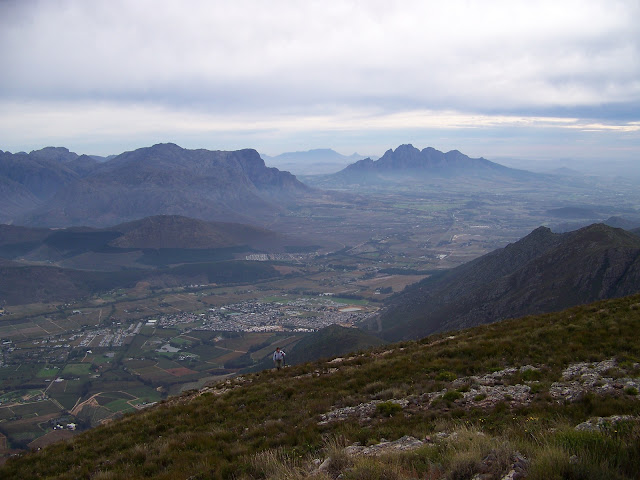 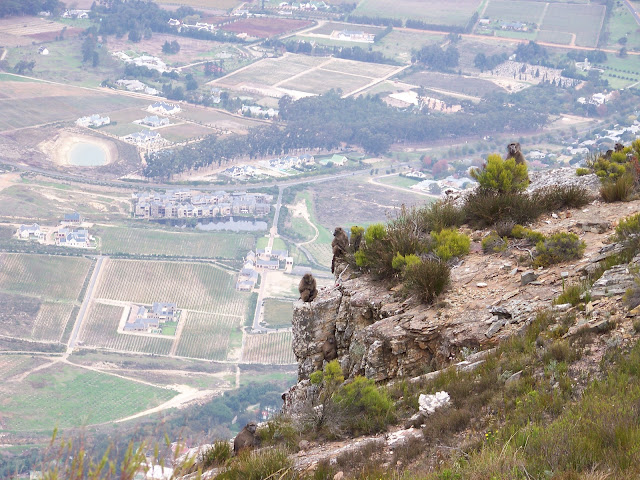 We encountered two troops of baboons, one below Suikerboskop and the other on the way up to Du Toitskop. The latter troop unusually allowed us to thread our way up the slope between them, one group on the left comprising a male perched on a rock and another few in a lone pine; the other group on the right watching us silently from a rocky ridge only tens of metres away. No barks, no calls, just quizzical looks and stony silence.