Adventures at the end of the world

After Torres del Paine the mission was to sea kayak in the Chilean fjords. 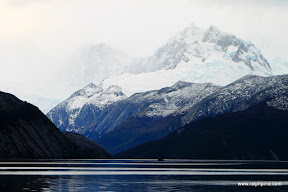 We (there were now only four)  hadn’t done our homework very well, but had a vague plan to hook up with a kayak outfitter in Ushuaia, Argentina’s southernmost city on Tierra del Fuego. Shaun had the great idea to take a Chilean ferry from Punta Arenas to Puerto Williams, the southernmost permanent settlement in the world, which is only tens of kilometres across the Beagle Channel from Ushuaia. While online forums and travel websites suggested that there is “no way” to get from Puerto Williams to Ushuaia how hard could it really be ? We would find out…

The 36-hour voyage on the Yaghan, a Ro-Ro ferry that makes the trip there and back once a week, was magical. It was nigh empty of passengers, new, very clean and comfortable, like a luxury train: Pullman seats and large viewing windows. The route that threads its way down the Magellan Strait, through the Cockburn Channel, across Bahia Desolada, through the O’Brien and Darwin Channels and then east up the Beagle Channel reeks of maritime history: Magellan’s discovery of the passage to the Pacific, Darwin’s voyage on the Beagle on which he started to develop his theory of evolution and Joshua Slocum’s first solo circumnavigation of the world, where he was blown back around the tip of South America and had to risk the Magellan Strait twice in a time when the Fuegian indians were viewed as “savage” renegades and a threat to ships.

The southern fjords, islands, glaciers, ice fields and mountains of Chile’s Magallanes and Antártica Chilena region have almost all been declared national parks. It is a beautiful, harsh, almost peopleless wilderness. Fin del mundo – the end of the world. Here I spotted my first albatross, a massive, graceful bird.

As the Yaghan nosed onto the slipway at Puerto Williams around midnight on Thursday 3 May 2012, we as yet had no place to stay. Luckily a German couple had booked a refugio and suggested that we should tag along. The refugio, an unmissable blue cottage run by a large, jolly lady called Cecilia happened to be located at the end of the slipway – and yes, there was place at the inn. Things were looking up. 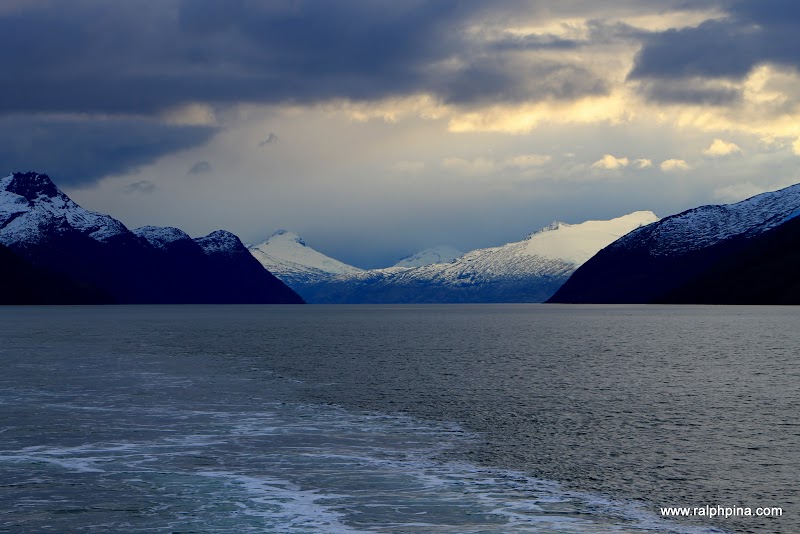 On the voyage there had been growing unease about our flight arrangements from Ushuaia to Buenos Aires on the coming Sunday. While in Punta Arenas, an email from the online agency urging me to check my booking prompted me to look – our flight  had been cancelled and it appeared as if we were bumped to a later flight, which would cause us to miss the return flight from Buenos Aires to SA. That was problem #1 – all attempts to deal with it online and via email were abortive.

Problem #2 seemed to be that we were unable to change flights from our outpost in Chile, nor were we able to cross the channel to Ushuaia to fix the problem – or to simply understand its extent. Jolly Cecilia informed us with a grin that there were no boat services across the channel and told us to “relaaaax”. Then the possibility of a charter flight on Saturday was dangled in front of us. The promised Saturday departure rapidly became Monday as 48 hours’ preparation is required, but the airstrip is closed on Sundays. We started to visualise large amounts of money disappearing into changed and missed flights and charters. I began to develop two (not quite serious) complementary theories: 1) the Beagle conflict between Argentina and Chile had developed into a sort of lingering cold war making any sensible communications and travel across a few kilometres of water impossible, and 2) the hospitable locals exploit the ‘hostilities’ to keep you and your dollars captured in Williams for as long as possible. The upshot of all this, unfortunately, was that we were unable to enjoy the hiking attractions of Isla Navarino at all (the kayaking possibility had long since been discounted). 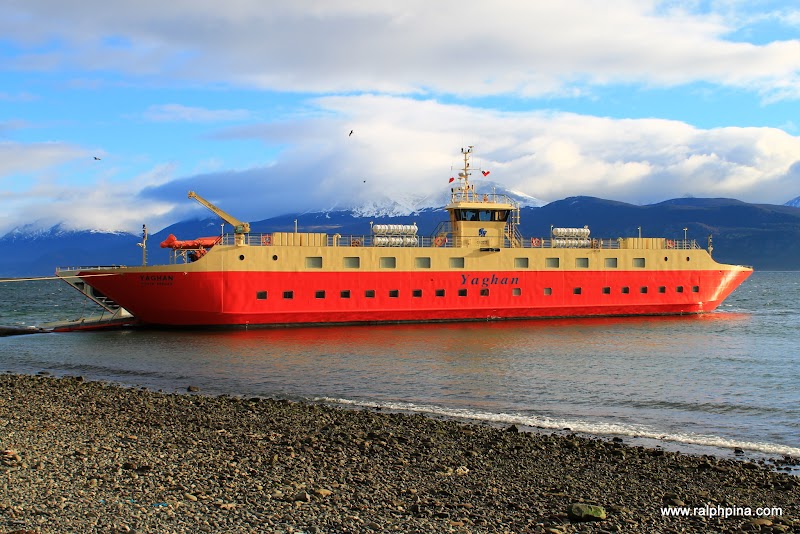 On Saturday morning, while we were considering the wisdom of taking a hike up the peaks behind Williams over breakfast, Cecilia stormed in and breathlessly informed us that a yacht was leaving for Ushuaia ‘now’. Now? Si NOW! No more “relaaax”. Frantic packing and grabbing of bags followed, hurried goodbyes and we headed down to Micalvi, the southernmost yacht club on the planet. There we bundled aboard a steel, French-built yacht piloted by Mariano, an Ushuaian, and Antonio, a Spaniard with the air of a sea gypsey. Cost of charter: USD 145 per person. “Ok, we’ll pay when we get to the other side.”

The crossing took about eight hours. It was cold and the ‘williwaws’, Slocum’s curious term for the icy squalls that career off the surrounding peaks, regularly forced the yacht onto its beam ends. Soon after dark we motored into a flat-calm Ushuaia. On the Sunday we confirmed that problem #1 had come to pass and resigned ourselves to an unplanned three-day stay in Buenos Aires to wait for the next flight home. Those three days were very enjoyable and served to cement my fondness for the city.