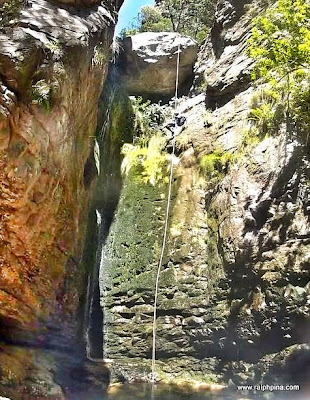 about the nature of the mountainscape in which this annual, mountain club abseil trip is located. The Groot Drakenstein massif rises to the east of greater Stellenbosch and is indeed imposing and although its slopes are very accessible, its inner sanctum is remote. Our route in was via the forbiddingly named Duiwelskloof to an overhang near the top where we settled in for the night. Early the next morning we walked to the head of Volstruiskloof (Ostrich Ravine) and spent a glorious day descending it via 15 abseils (350 m on the lines in total).

An adventure outing like this is usually somewhere near the extreme end of the scale of things I am prepared to do. However, I bought a harness and abseil device two years ago with the intention of tackling Volstruiskloof but somehow found something else to do on the scheduled weekends. Some would call this “chickening out”. This time I committed two weeks in advance. Those weeks were spent visualising the abseils, especially the notorious 120m one that is divided into two 60m sections and requires one to unclip and clip onto a new line on a ledge. I tried to visualise this ledge, but every day that ledge shrank in size.  Upon touchdown I found that it is actually quite spacious and features a pothole known as The Baby Pool. In retrospect, I think that the other double-pitch abseil that required a change of line in a more precarious, suspended rock pool known as Die Yskas (The Fridge), I believe, was more intimidating.

It was the emails from the trip leader, Teuns, that pinged into my mailbox a couple of days beforehand, one of them addressed to me specifically – apparently the least experienced of the group – that put the wind up me. Phrases like: “are you ok with heights?”, “inherently dangerous”, “exposed places without protection”, “at own risk”, “any eventuality (injury/death)”, did nothing for my peace of mind. It was perfectly understandable though. As a trip leader you don’t want someone to freeze up halfway down a wall, so filter them out in advance.

The abseils are truly high and spectacular but the descent proceeded without mishap, although as a novice (I have abseiled a dam wall as part of wildfire fighter training but it’s not quite the same) I did manage to scare the bejesus out of myself on two occasions. I almost inverted myself a third of the way down a high wall and the first time I swung below an overhang the rotation was a bit unnerving. Moments of silent panic. But I realised that one has to relax and simply keep lowering away. 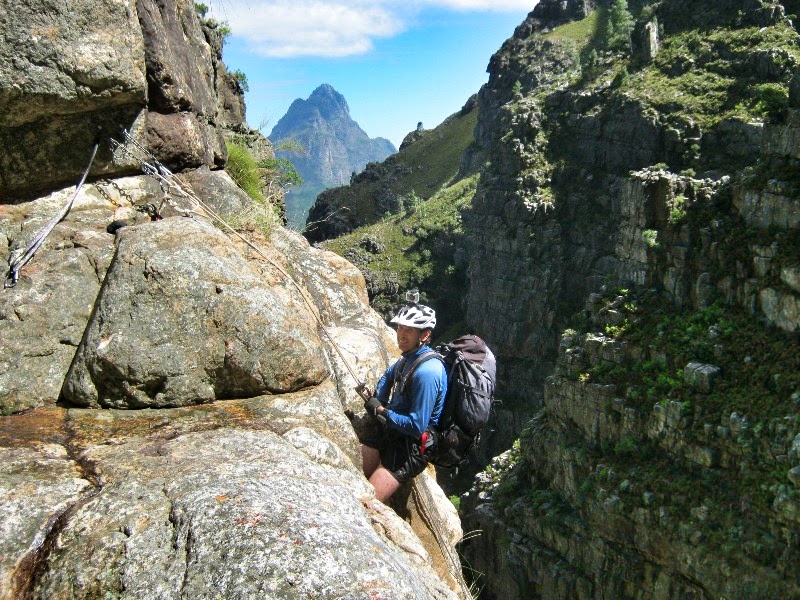 Over the edge – the second 60m. Photo by Teuns Kok. 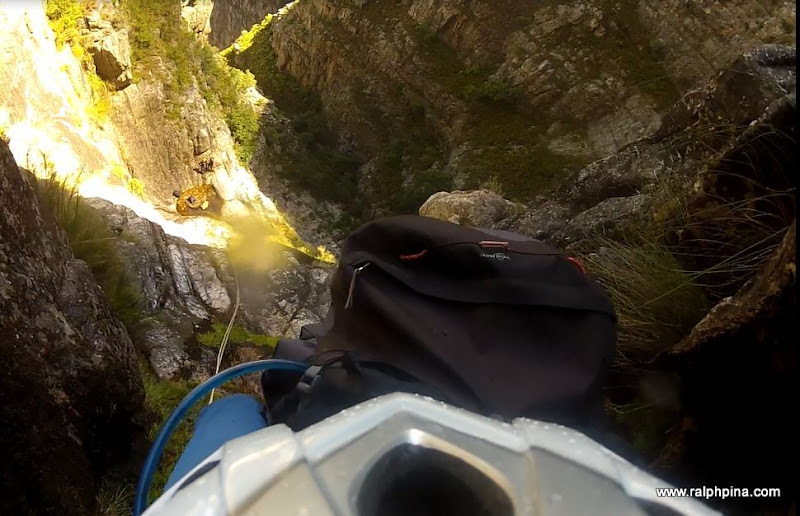 Volstruiskloof is more benignly named after the harmless ostrich because a rock formation above it apparently resembles the bird’s legs and body. The abseil route was opened in 2001 by Teuns Kok, one of the harder core members of the MCSA’s Stellenbosch Section. Teuns led this MCSA outing as well and did so extremely ably, paying great attention to safety and protection and imparting calm advice.

This is a serious kloof-abseil trip and must only be undertaken by people with the necessary equipment, skill and experience.


If the slideshow does not render, go to the photo album