After the Canal du Midi we rented a car at 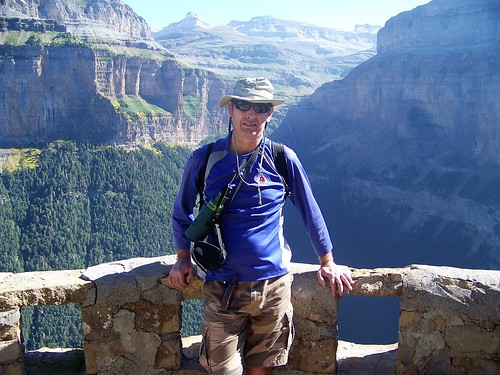 Carcassonne and drove through the Pyrenees to Torla in Spain, a mediaeval town high up in the mountains near the mouth of the Valle de Ordesa. Peter had argued for the canyon to be on our itinerary as it was the third tick on his list of five lesser known but spectacular hikes in Europe. And spectacular it is. Not to mention extremely popular. Most of the hikers in the valley appeared to be Spaniards, young families, daywalkers like us, interspersed with groups of young, harder core hikers, and many with dogs, which is a strange sight in a national park for South Africans.

The old towns in the Pyrenees are also either way stations or starting points for pilgrims on the longer versions of the Camino de Santiago.

The Valle de Ordesa is a deep canyon cut by the Rio Arazas near the French border. There are many hikes of differing lengths and difficulty. It forms the core of the Ordesa y Monte Perdido national park, which in turn is part of a UNESCO World Heritage Site along with the mirror peaks, cirques and canyons in the French Pyrenees. The park is dominated by the 3 555 m Monte Perdido (the lost mountain, or Mont Perdu in French) massif, the largest limestone massif in Western Europe. We walked two popular trails: the valley floor hike from Torla and the Faja de Pelay hike along the canyon rim to the Cascada de la Cola de Caballo (the horsetail falls). The latter is highly recommended, but involves a steep trudge up a switchback path, gaining some 600m in elevation relatively quickly.

Before the hikes our arrival in the old town of Ordesa late in the day, had all the hallmarks of an insensitive tourist invasion. In our defence we were tired after the long drive through the Pyrenees from 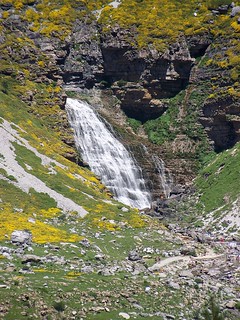 Carcassonne and some idiosyncratic routes suggested by Google Maps, one of which led us down the proverbial garden path. Peter was taking the driving load and driving on the “wrong side” of the road on some narrow passes can be a little stressful. Upon entering Ordesa we were so intent on finding Refugio Lucien Briet before dark, that we missed the massive car park below the village that is meant for seasonal barbarians like us. So we drove the little Citroën down the Calle Francia which is but a mediaeval, cobblestone lane, teeming with turistas and barely wide enough to take a car, and found the refugio easily. Marion, perhaps more frazzled than Peter and me, demanded that we unload at the inn. Besides the fact that delivery vans use the calle regularly, there are no parking spaces, so you can’t stop in the lane. But there is a little alcove in front of the refugio into which we misguidedly tried to reverse the car to comply with Marion’s instructions. Big mistake. Even the small car is too large to maneuver in such confined spaces. I was giving Peter instructions while passersby, and locals especially, shot us dirty looks and probably some choice Spanish insults too (luckily I am only taking Spanish lessons now). But in general, I think they were a lot politer than I would have been had the roles been reversed. Eventually we squeezed in – blocking the front door of an elderly lady’s house. Understandably, she was less than amused. Peter tried to explain in French-English, without much obvious success, that we would be out of there in minutes. Thinking back about it, it is one of those moments in life that make you involuntarily wince with embarrassment. At least we managed to not damage any centuries old walls. 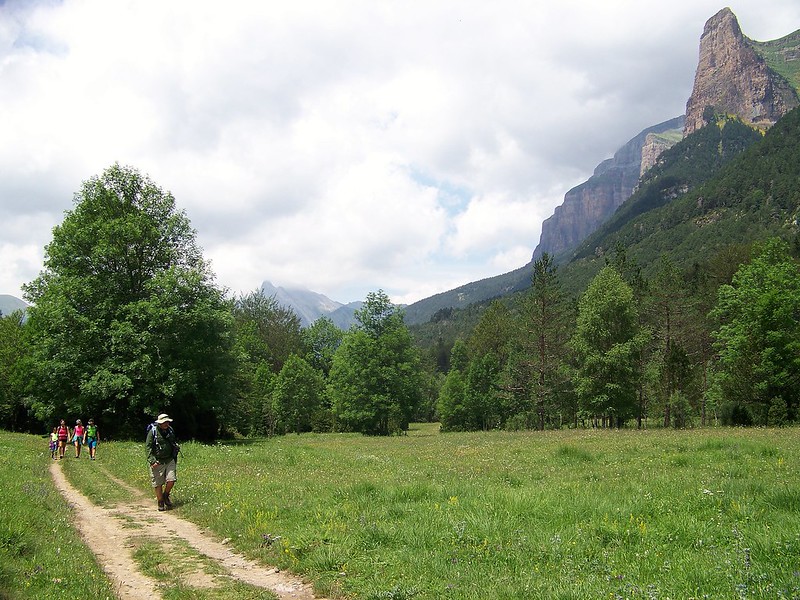 We had agreed to share a 3-bed room to keep costs down, but we had also neglected to check on a few things about Refugio Lucien Bret. Upon arrival we realised that the refugio is really a backpackers inn, which as most seasoned travellers – which Peter and I are – would know, provide the basics in terms of kitchens (no cutlery nor utensils) and … no bedding. If we had been backpacking of course, we would be carrying utensils, cutlery, kettles and sleeping bags. We managed to beg some sheets off the landlady and luckily it was warm in the mountains, so all worked out fine. And we bought some plastic plates and cutlery. The local cleaning lady also took a liking to Marion – most people do – so we benefited from some other unexpected perks.

We are all big tea drinkers and Marion always has a kettle on the go. The refugio had no kettle and upon enquiry we understood that we had to use the microwave (microondas) to heat water. Subsequently, I learnt in my Spanish class that Spanish has no word for kettle – it is unknown and Spaniards historically heat water in a pot on a stove. Interesting bit of trivia. 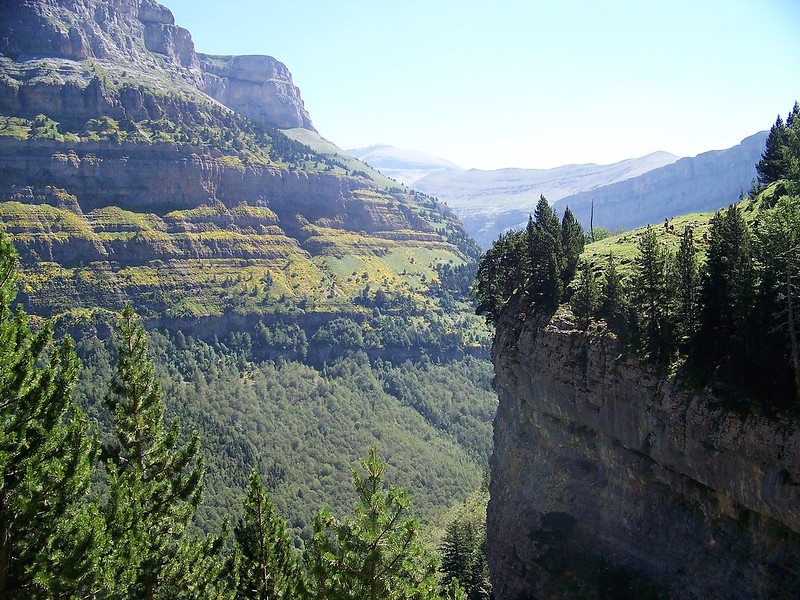 Our Thursday mission was the 20+km Faja de Pelay hike from Pradera, and given the distance

and knowing a steep climb to the canyon rim awaited us, we took the shuttle bus up to the park. The busses drive the route from Torla to Pradera every 20 minutes and they run fairly full, so you can estimate the number of visitors the valley carries every day. One buys the return ticket at Torla. It has two tear-off sections, one for the trip up and the other for the trip down. Anyway, after the hike we were tired and sweaty as we queued to board the bus. I boarded before Peter, presenting my ticket strip to the driver who waved me aboard. From my seat I could see Peter remonstrating with the Spanish driver in English-cum-French, without much apparent success. Eventually Peter huffed aboard, his eyes wild with indignation under that unruly fringe. “I told him I had a return ticket!”, he stormed as he waved the stub. “Peter, there are two tear-off strips, and you needed to give him the remaining one for the return trip”, I said. Oh. He rummaged in his sweaty pockets and eventually produced the wet, crumpled wad. It had parted company from the stub somewhere on the hike. He jumped up and presented it triumphantly to the driver who grinned and slapped him on the shoulders. Peter beamed. We had a good chuckle. All was well with the world again. 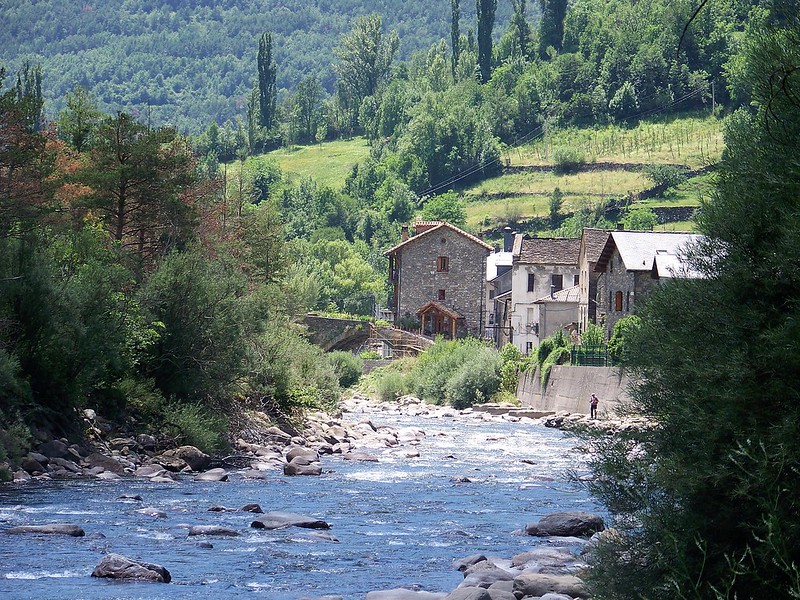 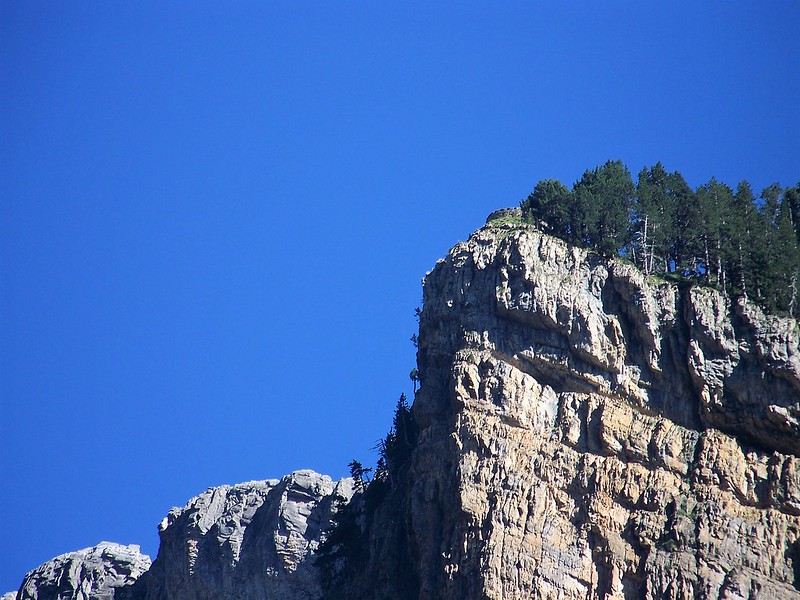 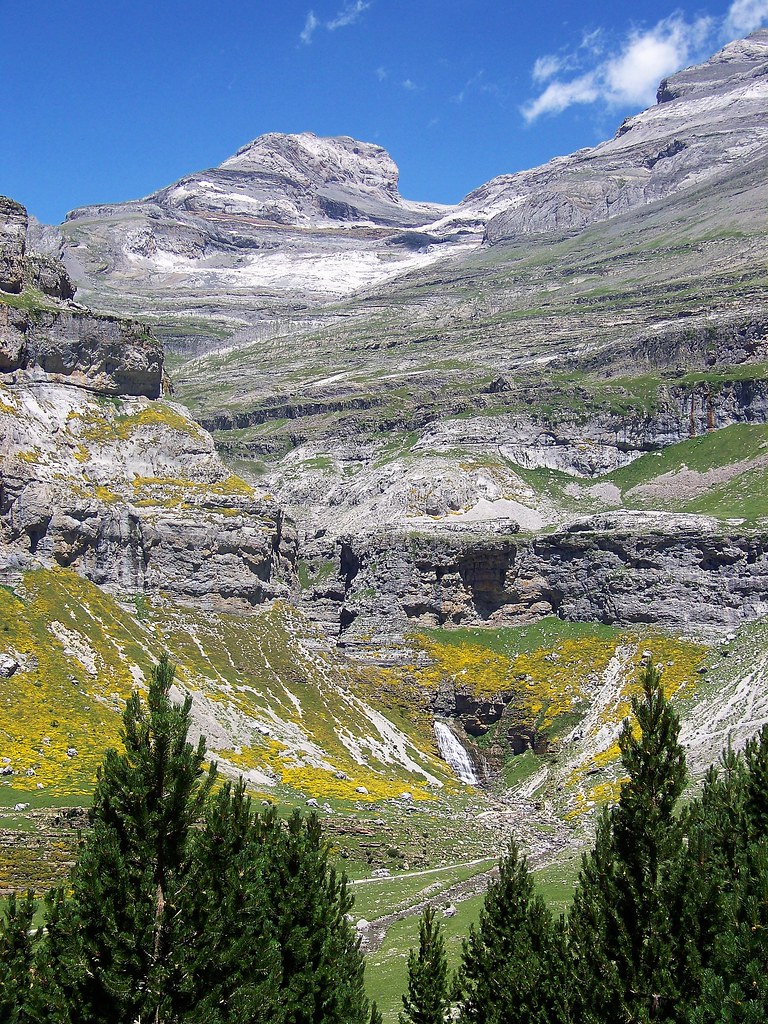