With Santie having proposed another springtime foray into Assegaaiboschkloof to view the blushing brides in bloom, I misguidedly proposed a refinement to the hike: why not start at the Berg River Dam and continue over Bergriviersnek to Jonkershoek? I mean, I have done it a few time before, and in both directions. In the subsequent messages between us and and the third member of the party, Alex, I thought I had limited the distance by suggesting that we leave a vehicle at the Witbrug in Jonkershoek. That would turn a 26 km yomp into a reasonable, but still long, 21 km. 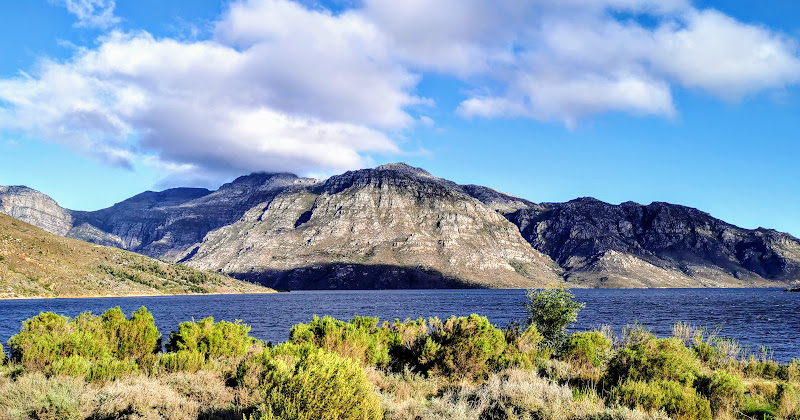 However, come the day, I was overruled. So we left the second vehicle at the Jonkershoek gate – in the interests of starting earlier from Robbertsvlei. In the event we started hiking at about 8 am. The trail’s first 10 km involves a gradual rise along the course of the Berg River, through an area that was once the La Motte pine plantation. The fynbos is slowly recovering but still displays low diversity – albeit to my untrained eye. Soon after crossing the river the trail suddenly jacks up to hug the slopes north of and above the river. This is still pristine nature reserve where you will find a bewildering array of flora, including blushing brides (Serruria florida), mountain cypress and assegaaibos (Leucospermum lineare I assume, and from which, I assume, the kloof takes its name). We spent time here drinking in the colours and the scents, and gazing at the huge kloofs, peaks and numerous waterfalls on the southern side of the valley.

After lunch in a woody side kloof, we tackled the final ascent to Bergriviersnek. And this is where the hike gets tough. After crossing the upper reaches of the stream that becomes the Berg River and traversing a clump of montane forest, the path starts to zigzag up a steep wall that is overgrown with prickly bush and bamboo-like reeds. There is a narrow path but it slopes sideways and the attempts to clear it have left sharp stumps, reeds and spear-like branches at various heights that make a fine bloody mess of your legs if, like me, you are wearing shorts, and could poke your eyes out. By now you are about 15 km into the hike, so you’re feeling a bit punchy and not-so-nimble. The climb rises through about 300 m in a very short distance and although it is not a scramble, it is fairly strenuous.

The reward is topping out on Bergriviersnek, the watershed between the Jonkershoek valley and Assegaaiboschkloof, which remains a most spectacular place. From there Jonkershoek unfolds before you in the late afternoon sun. The choice becomes: follow the contour path past the Peaks and take the forestry roads down to the gate, or, head for the Witbrug and bum a lift to the gate. We opted for the latter, walking fast and knowing that the gate closes at 6 pm. But as we descended we could see the few vehicles left at the Witbrug depart one by one, so that by the time we arrived there, there was one SUV left with the owners nowhere in sight. It was at this time that I started to tease my companions by swearing that I had left my bakkie at the bridge and had spotted it on the descent. Anyway we started trudging along the road to the gate, and while I joined a scheduled, family Zoom call while walking (amazing, isn’t it?), my companions disappeared into the distance. Eventually, near the gate the SUV cruised past, all its seat taken, so it was just as well that we didn’t wait for the owners to appear.

At about 7 pm, having retrieved the other vehicle at the dam, we settled for most welcome pizzas and alcoholic beverages in Franschhoek. I, for one, was thoroughly knackered. But even Santie admitted that she was kis – and that I have never heard before. 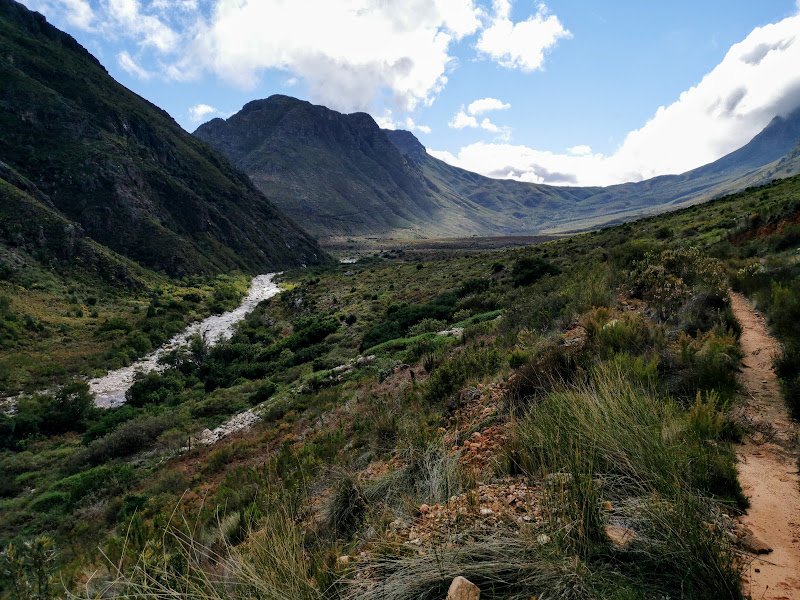 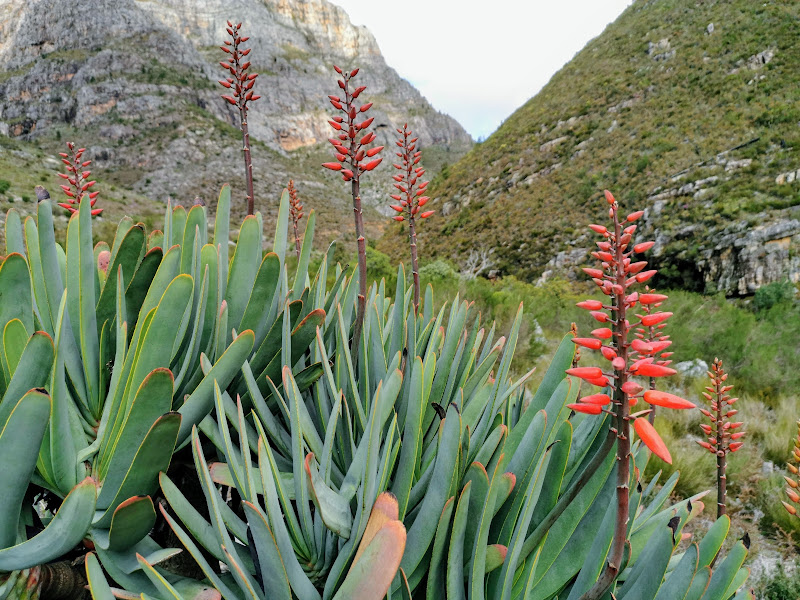 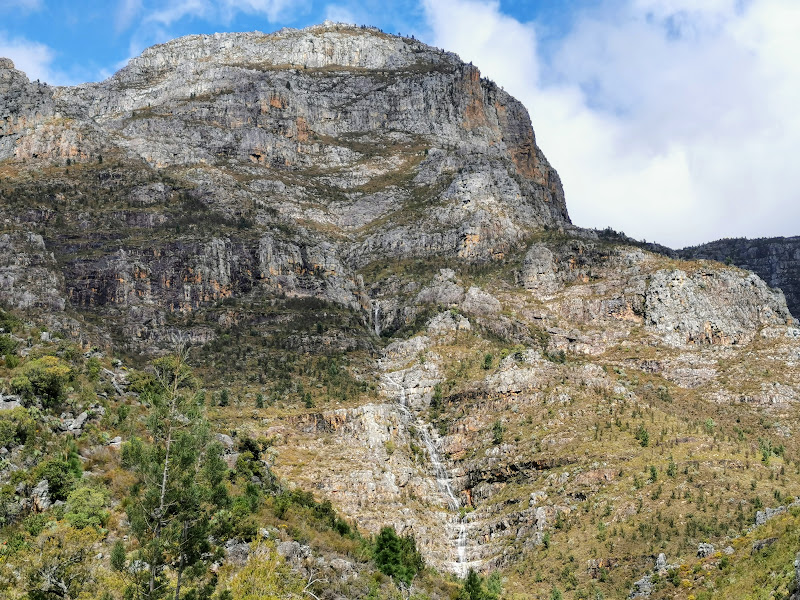 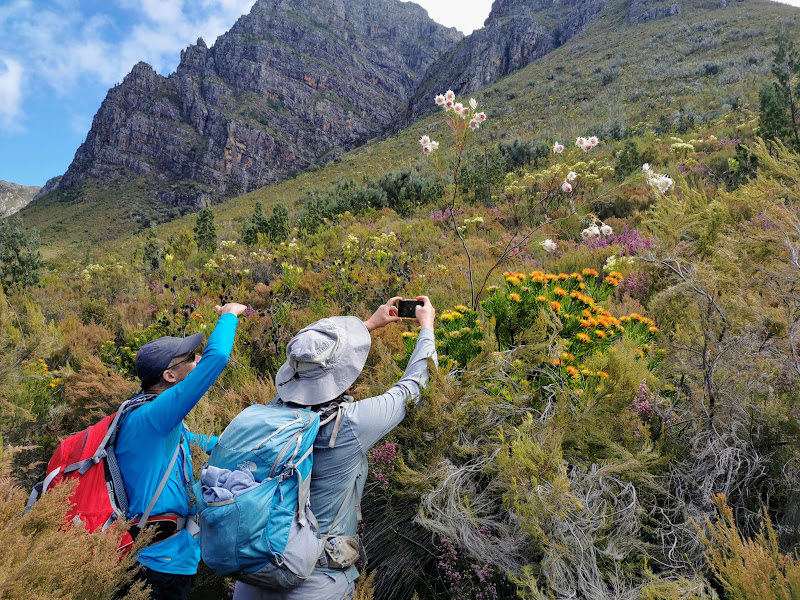 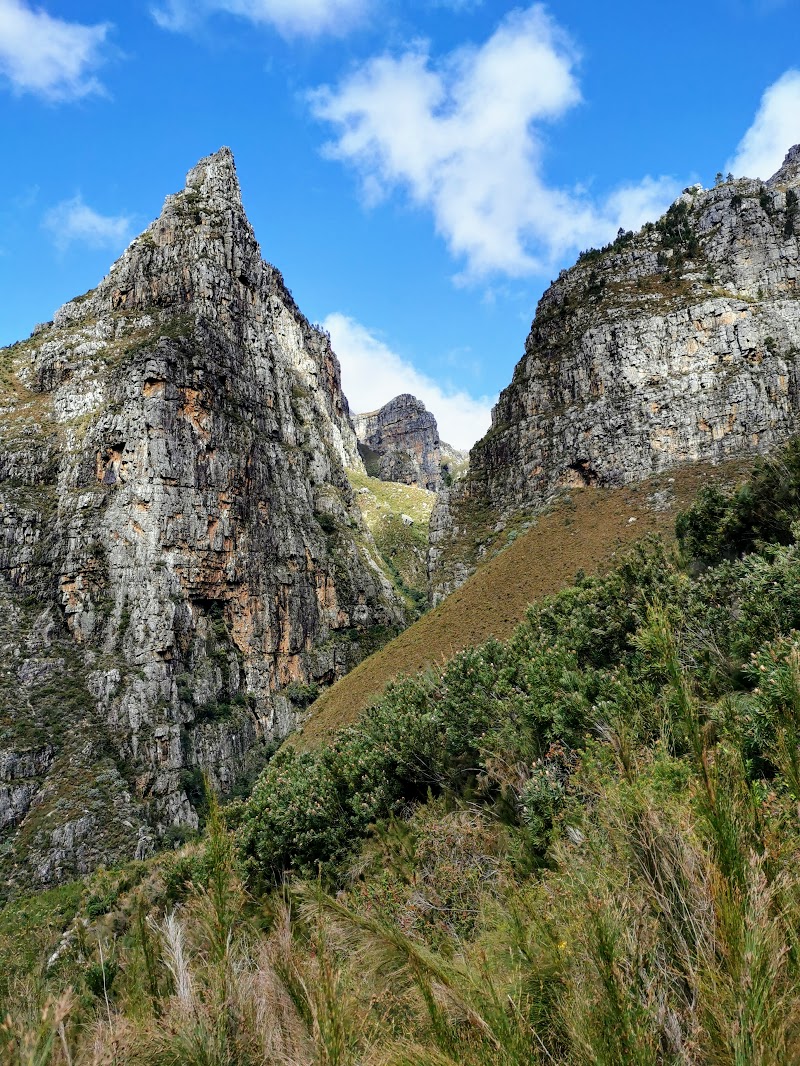 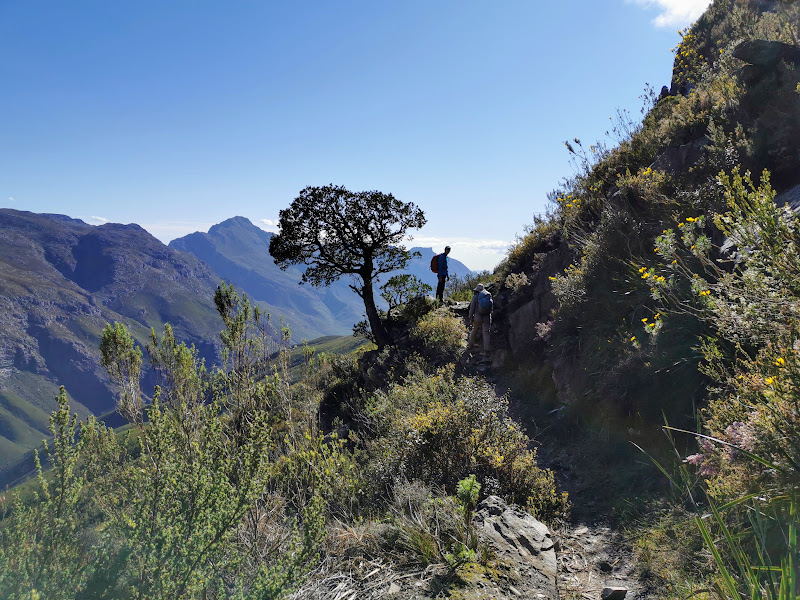