This page features some personal memories about playing the game. To find out how I think about football, go here.

Playing for Stellenbosch University in the South African University (SAU) tournaments was the absolute highlight of a playing career that spanned 30 years.

These were tough-looking students – SAU 1977 Pretoria 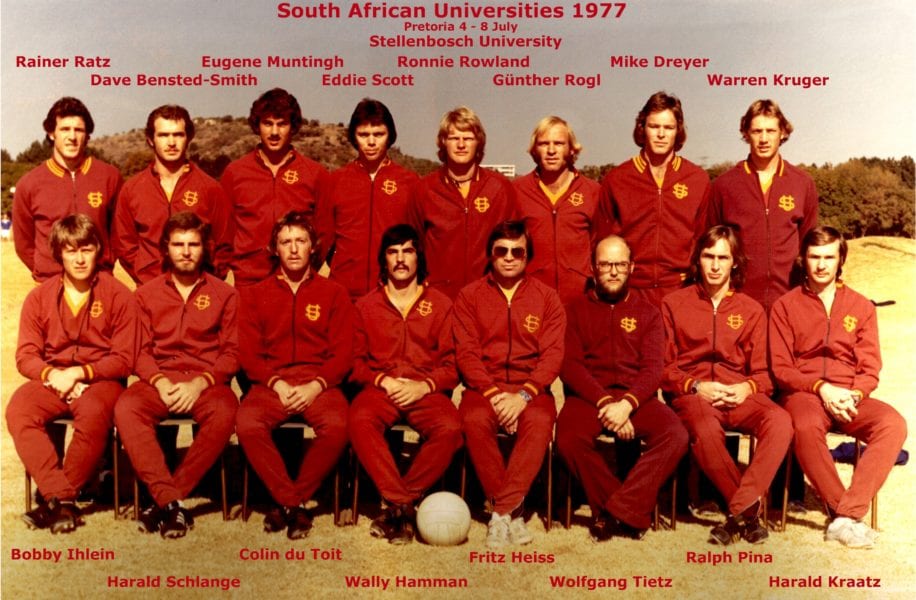 On our home turf in 1979, with a stronger team, we were expecting to win, but came 4th. Over-confident, over-prepared… When Paul suggested a lockdown escape to Cascades in Du Toitskloof, with a little abseiling involved, I thought it a decent idea. I knew that the MCSA often scrambled up it and abseiled down the next day. My conclusion was that if you can scramble up it, it can't be...

END_OF_DOCUMENT_TOKEN_TO_BE_REPLACED Almost by accident I was nominated to lead a MCSA Stellenbosch section kloofing trip down the Visgat canyon. Visgat is a highlight of the MCSA Cape Town section's summer calendar and they kindly allocate a few dates to Stellenbosch. The fact that I could have easily...

END_OF_DOCUMENT_TOKEN_TO_BE_REPLACED My recent post, The Whale Trail in the Pandemic, has attracted enormous traffic, by the standards of my site at least. In it I opine that biological control of Acacia cyclops (rooikrans) in De Hoop Nature Reserve is failing because my - admittedly unscientific and...

END_OF_DOCUMENT_TOKEN_TO_BE_REPLACED The Whale Trail in the pandemic

As South Africa emerged from the hard lockdown in mid-2020, I became desperate to escape to the outdoors. On the off-chance that the Whale Trail was open, I contacted Cape Nature and easily obtained a booking for the trail in January 2021. The hugely popular trail was...