Having eaten and drunk our way across Botswana and Zimbabwe,never having to lift a finger, we were quite keen to do something physical. The famous Lower Zambezi canoe safari (with Canoeing Safaris of Kariba) had been something I had wanted to do for years. And I was not disappointed: this was a great adventure experience, not least because of the ever-present danger of hippos and crocs. In fact, the Zambezi could be described as something of a hippo obstacle course. 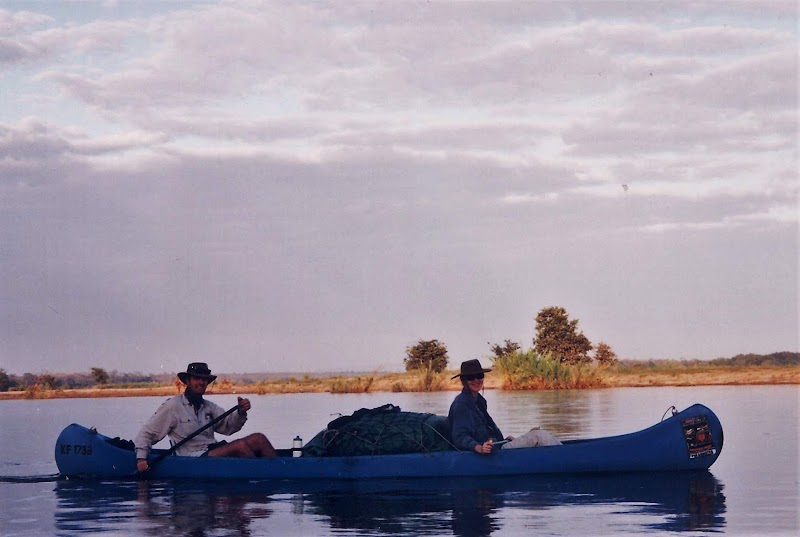 Extending the military metaphor, day one’s paddle from Chirundu to our first island camp was like “basics” (boot camp to non-South Africans) – 23km in an afternoon (sunset at 18h00), with single paddles on a wide and sluggish Zambezi. Pretty tough if you’re unused to paddling, or if you have been leading a sedentary existence like we had for a week.

Camping on the islands

Our first camp on a sand island was opposite a hunting camp on the Zimbabwe shore. Its only significance in this narrative is that it ran a diesel generator for a couple of hours, which tends to detract a bit from the wilderness experience… The group was pretty tired and reflective, contemplating another 3 days of hard paddling. What had we let ourselves in for?

Marion and I were surprised to discover that we

were the oldest. We have sort of got used to being the youngest usually, but this was a sign that the years are catching up. The lead guide was Fisher, tall and lean, and who takes his responsibilities very seriously, and rightly so. The assistant guide, Kingsley, always has a ready smile and a witty word. Both these guys worked hard, kept us well-fed, and above all – safe. Stay close in a line astern, watch the lead guide, obey instructions, let the hippos have the deep water…

Jen and Chuck were from Indiana and Richard and Helen from London. And then there was Doug, mid-thirties retiree from Canada, with an alternative lifestyle and an alternative outlook on life. (At the time of writing Doug is still somewhere in Africa in alternative travel mode). Evenings under the stars around a candle (no fires allowed) were reserved for deep philosophical discussions, which given our different backgrounds, were rather stimulating.

10 July, midday: “I am writing this, stretched out on a mattress under a thorn tree on an island at the Rukomechi confluence in Mana Pools National Park. About 100m away, across a shallow sand bar is a pod of hippo, intermittently snorting and grunting. On the Zambian shore the escarpment is close. On the Zimbabwean bank a lone elephant drinks from the river…now I see four. So peaceful.” Such was the pattern after day one: early morning start, breakfast on an island, lunch and siesta on another island, easy paddle to the next campsite – on an island.

We got really close to three bull elephants on the Zambian bank. One mock charged while I was trying to shoot. The result: much manoeuvring and no photo.

The approach to our island camp at Vundu was tricky. We had to thread our way inshore of about 5 hippos, coming to within metres of them. This required delicate co-ordination between paddlers while adjusting for the vagaries of the current. The hippo-spotting technique of the guides is interesting: proceed slowly, tap on the canoe’s hull twice and watch for the ears and eyes that inevitably surface as the owner attempts to locate the source of the noise.

The channels around Vundu are deep, the bank sloping rapidly away into dark depths where one could easily imagine reptile eyes coldly calculating the odds of a successful ambush. The guides’ warnings of not to approach the water after dark were taken seriously. Apparently, last year a customer disregarded this advice and took a croc in the chest. He survived thanks to the selfless actions of a guide.Unlike the first day, the rest of this safari was very leisurely with generous time to relax and relatively short distances to paddle each day. After leaving Vundu we dodged hippo all morning before landing on Trichilia Island, so named because of the massive Natal Mahogany trees (Trichilia emetica) that form a mighty green canopy over the island. We spent a wonderful siesta here, idly watching elephant, hippo and various antelope in the distance.

Although both sides of the river are national park, there are many camps on the Zambian side, and motorboats are allowed in Zambian waters. The lack of regulation is unfortunate.A few times we would drift up to massive crocs sunning themselves on the sandbanks, only for them to slip silently into the water, and disconcertingly, under our canoe, never to be seen again. Zambezi crocs are large with a yellowish colouring.

Our next camp, on Devil Thorn Island, was shared with a lone elephant bull and a buffalo. Both disappeared by last light. Fueled by some swigs from Doug’s jug of Scud, a local Kariba brew with the lumpy consistency, texture and smell of vomit, which he had lovingly conserved on the trip, we launched into a long debate about ethics and economy. (Scud was apparently launched onto the market during the time of the Gulf War…)

A mellow, short paddle took us to Mana Pools’ Nyamepi Camp and the take out. But not before a wonderful, last close encounter with a lone bull elephant who made our day by trumpeting and shattering a few nerves as we drifted almost under his tusks.

And so like all good things, our canoe safari ended.

Doug continued with Kingsley and Fisher to Kanyemba. Here is an extract from an email sent from Malawi some weeks later: “We had crazy discussions and saw at least 3000 hippos, 1000 crocs and 6-8 elephants all in the river (the guide had a big gun!). We survived but unfortunately we saw a local dude who didn’t – he had been bitten in the face and chest by a hippo and was floating in the river when we came across him…not ideal.”