Impressions of The Great Walk in Tsavo A 153km walking safari following the courses of the Tsavo and Galana rivers through Tsavo National Park, Kenya: June 2007.

The ghosts of the colonial engineers who pushed the cold steel of empire across the arid coastal plains to the Great Rift Valley. And the ghosts of the Indian “coolies” who laboured under East Africa’s vast sky to lay the sleepers, clasp the rails, cut and place the stone of the rail bridge that still crosses the Tsavo River. And were preyed upon by the legendary Man-eaters of Tsavo. The ghosts of those two massive, maneless lions whose survival strategy drew a brutal, typically human response. The ghosts of the British and colonial soldiers who built the First World War forts above the Tsavo, and the askaris and their German officers with whom they clashed. The ghosts of the Blixens and Finch-Hatton, the traces of the latter’s landing strip and hunting camp still evident south of the Galana.

The ghosts of Tsavo East National Park’s legendary wardens, Sheldrick and Woodley, larger than life, their marks on the land and their wildlife legacy still in evidence. The ghosts of the black rhino, their numbers, until the ’60s still in the thousands, decimated so that only a handful survive under armed guard. The ultimate irony is possibly Tsavo’s iron gates that proudly frame the rhinos’ metal silhouettes, their horns, both their pride and weakness, raised defiantly.

But the red elephant still roam, their numbers are steadily increasing. The Tsavo and Galana, timeless and wild, still roll red to the Swahili coast and the Guardian of the Plains, Epiya Chapeyu, still gazes benignly from the Yatta escarpment across the dry, red expanses. The maneless lions still watch the herds of zebra and buffalo and skittish groups of Peters gazelle, gerenuk and oryx from the saltbush. The Bush breathes, but with quiet breaths, cautious and hesitant lest it again attracts the not-so-tender attention of Man.

On foot, the pulse of Africa comes through your boot. You are an animal among others, chary of the shadowed places, of sudden quiet in .the air.
Peter Matthiesen, The Tree Where Man Was Born, 1972

Night falls suddenly in Tsavo, so close to the equator. I remember lying in my tent listening to the night, but I was almost always struck by the silence. Only once, at Durusirkale, the quiet was shattered by an elephant rumble – close. It sounded right on top of me. Then one trumpeted. Nobody believed me in the morning. My tent was at the end of the line of tents under the Doum palms and Tana poplars. The next day I wandered about thirty metres away and found their prints in the river sand. They must have come down to the Galana for their regular drink and been surprised to find tents and human scent, as the camp had only been erected that day after the six-month off season. 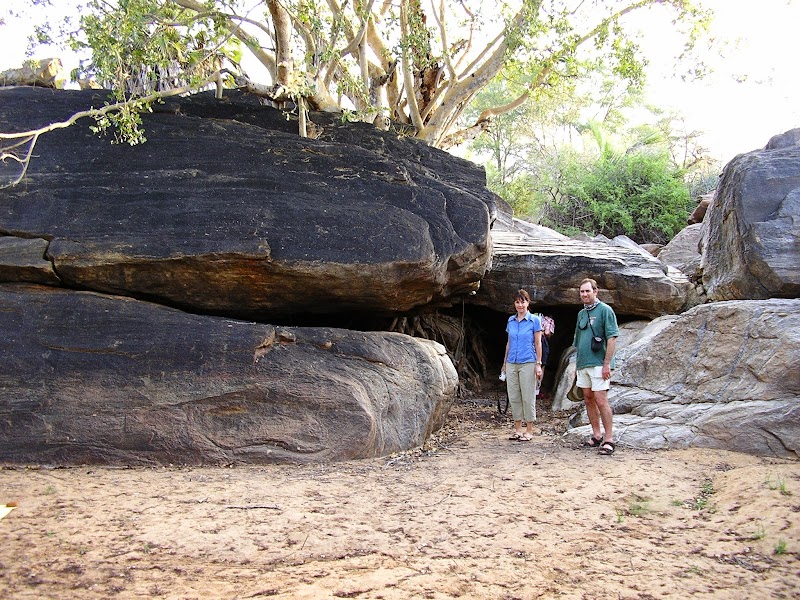 The elephants are nervous. They react in two ways upon sensing humans: a charge or, more often than not, headlong flight. On the one hand it is sad to see, but on the other their behaviour ensures their survival. Iain and his trackers were impressive in the way they were sensitive to the elephants’ trauma. They always gave an animal a route of escape. They never approached too closely on foot. On game drives, Iain always made sure to stay well clear, not to cross their path and to leave as soon as he sensed any agitation. He even ensured that they would not catch our scent, except for the shortest possible time if unavoidable.

Tsavo is a wilderness. It is wild. As a South African who is used to a lot of people and vehicles in a national park, roads, fences and gates, Tsavo contains almost no tourism development or infrastructure. Most campsites and lodges are located outside its borders and human presence in the form of tourists is negligible, although that may have something to do with the time of year that I was there. The park’s extensive borders are unfenced, allowing on the upside, better functioning of the ecosystem in the form of wildlife migration, but on the downside, uncontrolled access and probably poaching. While national parks should primarily be about conserving biodiversity, Tsavo’s tourism potential is underdeveloped and that could be a future problem as reserves and parks are increasingly required to “pay their way” in the face of growing human populations.

The park is arid. Its plains toward the coast were known to early travellers as the Taru Desert, a frightening barrier to penetration of the interior. Joseph Thomson described the Taru as a “skeleton forest” and “weird and ghastly”. In effect, the Galana and Tsavo rivers form a thin and tenuous ribbon of life through a sprawling dryland. Perhaps this is where the paradox of Tsavo has its origin: there are (almost) no humans, but the effects of humans on the ecosystem and the landscape are so marked, concentrated as they are along these rivers.

Crossing the rivers became a daily routine on the Great Walk. The Tsavo is a fast-flowing, ochre-coloured “ditch” that courses through thick vegetation, while the Galana is more of an “African river” to my mind: wide, meandering, sandy, fringed with palms. After the first two days of walking, during which we had observed plenty of nervous hippos and some crocodiles, we were pretty surprised to find ourselves on the opposite side of the Tsavo from our camp below Kichwa Tembo (“elephant’s head”). Iain’s advice before we gingerly entered the water was to “stay close together so you look like an elephant”. Right. But gradually, we became rather blasè about wading waist-deep through the rivers….

That is, until the last five metres of the last crossing of the Galana on the last day of the Great Walk. First Lojori – or was it Washii? – one of the little Samburu trackers disappeared underwater but metres short of the far bank. Even the tallest among us were up to our chests in a powerful current that flowed hard up against a submerged rock ledge. The eventual cost was two destroyed cameras, a waterlogged binoculars, its bag last seen heading for the coast, some painful shins and the plastic bag of camel kidneys.

Yes, camel kidneys. On the same last day, having already had three lion sightings that morning, we stumbled into a very surprised lion. It was surprised because it had brought down a strange creature – a camel – and was feeding on it when we humans chased it (by accident) off its kill. Lions may be chased off a kill by hyenas but not often by people on foot. The camel must have blundered into the park from the neighbouring ranch. The Samburu are familiar with camels and apparently parts of them are something of a delicacy, so they quickly set to work removing the fillet under the hump, fashioning the skin into a sort of “handbag”, and then they decided that the kidneys couldn’t be wasted on a lion either. Well, an equally surprised crocodile must have benefited further down the Galana/Sabaki. 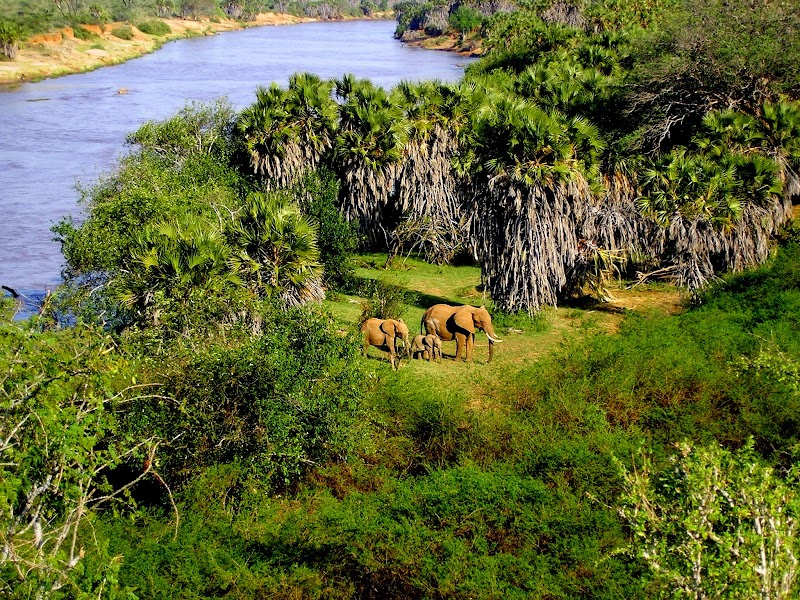 Tsavo station is a little surreal. And not only because a railway station is not usually on a walking safari itinerary. It is a step back into a Victorian-era railway – this one was once known as the Lunatic Express – replete with 19th century mechanical signalling and token working (I was once a signals engineer on the South African Railways, hence the interest). Touring through the old station building that houses the signalman’s office is like stepping into a previous century. I swear that the books and manuals high on a dusty shelf are just as the last colonial station master left them. The current signalman informed me that his new boss is a South African – a South African corporation has taken over management of the line apparently. We seem to be the new colonials in Africa… 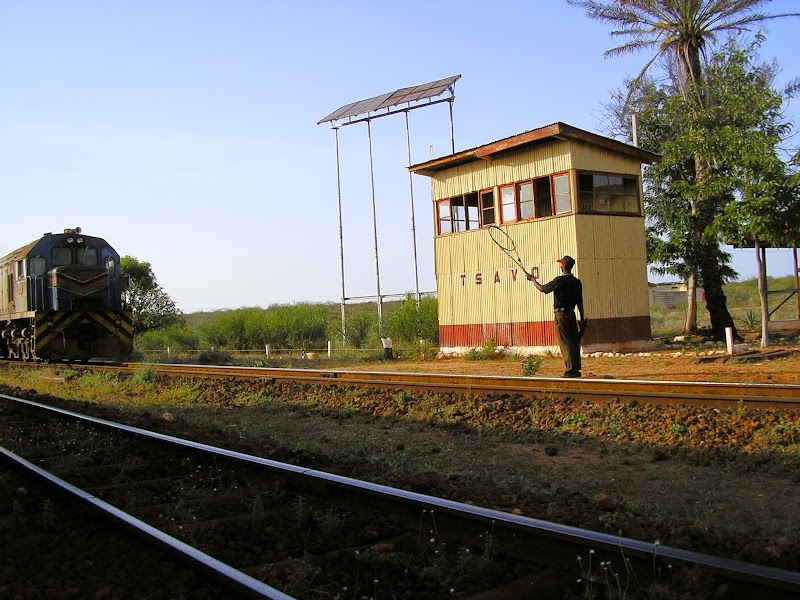 My photo album of The Great Walk

The Great Walk of Africa is operated by Tropical Ice