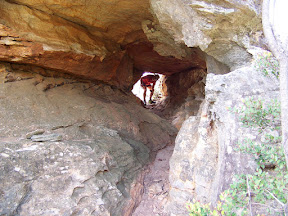 We all agreed afterwards that Oorlogskloof is probably the best hike in South Africa – mainly because of the care and attention-to-detail that went into designing the route to ensure a variety of experiences in a diversity of landscapes. “We” were Kelson and Elena, Scarborough-based South Americans with extensive trekking experience both in Africa and in South America, Paul (Trailmaster Watty) who has hiked widely in South Africa especially in the Drakensberg, and myself. Between us we have done our fair share of trails and we came to this conclusion after thoughtful discussion.

Why “Wessel Reloaded”? Well, it was my second hike in Oorlogskloof (the first time was a decade ago with erstwhile hiking partner, Peter, who wrote an amusing account called “The scourge of Wessel“) and secondly, we assume that the reserve manager, Wessel Pretorius, had a major hand in designing the trail. He must know the place like the back of his hand, judging by the nooks and crannies, chimneys and cracks that the path takes one up, down, to and through. If Wessel is indeed the trail designer, then you both curse and admire him as you puff and sweat your way through the obstacles – challenges that Paul dubbed “wesselismes” in his pidgin-Afrikaans.

So – it’s not your average trail. Neither is it one that should be attempted by hiking novices, unless they’re young or fit (ja, I realise the former does not guarantee the latter these days). Water can be a problem in the summer months. October this year was perfect as the veld had bloomed and there was more than enough water at most of the watering points indicated on the trail’s excellent maps.

The Rock Pigeon route features four camps comprising five dome tents each. Each tent comes with three foam mattresses – so that saves you from carrying tents and mats and also makes for uncommonly comfortable hiking  accommodation. The degree of difficulty and daily distances gradually escalate, peaking on days 3 and 4 – by which time you have hopefully acclimatised and grown into your pack – and eaten through some of the weight.

Day 1: Groot Tuin to Brakwater – 4 km (4.53 km according to my GPS, although we blundered about 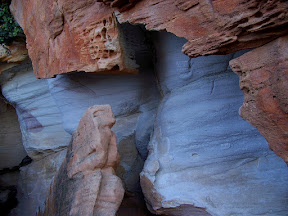 a bit at Groot Tuin after taking a wrong turn). It took us 2-and-a-quarter hours and the section gives you just a little foretaste of the obstacles to come. A highlight for me was the verdant wild olive and yellowwood grove in Saaikloof.

Day 2: Brakwater to Driefontein – 8.5 km (10.1 km according to me, although I don’t think Wessel will be inclined to move his cute clay km-markers). The going gets tougher, taking you up to the canyon rim, down to the Oorlogskloof River – which had plenty of water – and up to Driefontein camp on the rim via a rock tunnel behind a waterfall. The waterfall in question was a mere dribble this time, probably because the poplars along the stream up at Driefontein have spread and are sucking the water up before it plunges over the precipice.

Day 3: Driefontein to Doltuin – 12 km (13.5 km according to my GPS). Down to the river again, the crossing of which could be a challenge in winter, judging by the jury-rigged “bridge”. Then up the opposite slope in the morning sun, past a poignant little cemetery containing unmarked graves – what looks like two adults and a child. Not much is known about the people that settled here for a while, except that some sought refuge and eked out a living in the depression years (1929 -1934). The infamous chimney up to the plateau now boasts shiny chains instead of ropes and it somehow looks different to what I remember. The walk along the boundary of the reserve across sandstone flats and plains of protea stands can be hot work – and it was. Doltuin, near the head of a side kloof, appears like an oasis with its stone dam. Last time I only heard the wild donkeys; this time we saw them. They look fat and well. 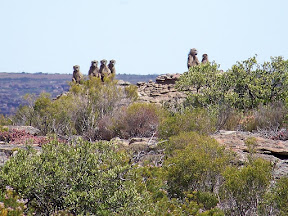 Arrie and the gang

Day 4: Doltuin to Pramkoppie – 17 km (16.5 km). Things get spectacular as you approach and skirt the escarpment edge above Knersvlakte. I highly recommend taking the 2.6 km detour to Arrie se Punt, the highest point on the trail at 915 m. Arrie and his troop were in vocal attendance the whole time and seemed to be curious rather than miffed at our encroachment on their territory. Wessel also ensures that you will negotiate ten (10) rock arches on this long day. The fairly steep descent around Pramkoppie reveals a cool, welcoming camp under wild olive near a stream. Pramkoppie was probably named by some long-deprived trekboer, because the resemblance is but passing.

Day 5: Pramkoppie to Groot Tuin – 10.7 km (10.5 km). Unlike the last time, when we slogged it back to Groot Tuin across the hot plateau, we took the Klein Heiveld Trail east along Rietvlei River’s kloof rim. At one point Groot Tuin is visible across dead ground, only 2.5 km away as the crow flies, but we know that Wessel still has another 6 km in mind. And when we get to Spelonkop (clearly something to do with spelunking) those extra k’s become eventful as Wessel takes us through crawlways and cracks that have us sucking our guts in, squeezing and leopard-crawling. In the euphemistic language of the brochure “the section that follows is quite taxing”. Indeed.

And so we got back to the vehicle, tired and smelly, but fulfilled. Our only regret was that the excellent Smidswinkel restaurant in Nieuwoudtville was closed – it being Sunday. Go figure. The dream of their tasty bobotie and ice-cold Windhoek lager, that had kept us going evaporated in the midday heat.

If the slideshow does not render, go to the photo album.