Disclaimer: I am not a cyclist nor MTB rider, so take the following from whence it comes: from a hiker who found himself riding a bicycle for 7 days over 611 kms on dirt roads and tracks. 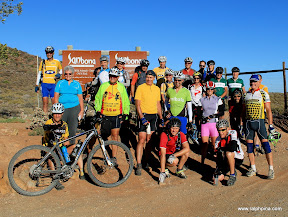 The first hint that this was not the leisurely bike tour that I had imagined it would be, occurred at Komdomo camp at the eastern entrance to the Baviaanskloof. Gleaming, carbon machines were lovingly extracted from their bike boxes and expertly assembled and tuned in the dusk. By contrast, I inexpertly re-assembled my more prosaic commuter bike in the shadows.

I had only that week succumbed to the pressure to buy cycling shorts, items of clothing that I detest. I think that middle-aged people look faintly ridiculous in them, a bit like the Michelin Man, trembling flesh shoe-horned into body-hugging lycra. On the tour I would also be introduced to the tender mercies of chamois – or bum – cream. Apparently it is a necessity, although on at least two days I did not use it, with no ill effects.

The second clue that this might be a race within a tour emerged after we entered the Baviaanskloof Nature Reserve’s eastern gate and the assault of the first of two passes, Combrinck and Grassneck, commenced. 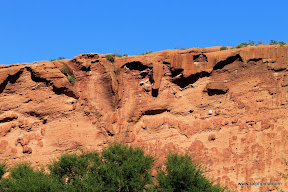 Apparently placid and friendly people adopted steely faces of determination and disappeared up the steep inclines in a cloud of dust. I decided to take my time, take photos, enjoy the breathtaking landscape and walk when it seemed quicker to do that than to try and propel a bike up the slope. By the time I reached the second summit the rest, bar a few, had long since disappeared down the winding track. I had to tackle the downhill with care because my gammy left arm – badly bruised in a fall while “training” some weeks earlier – prevented me from really bracing on it or even standing on the pedals. I was effectively cycling with one arm. Since climbing  on the bike I have fallen more times than during all my years of hiking.

The only real mishap of the whole tour occurred on this day: while negotiating one of the many river crossings the bike inadvertently ceased all forward motion against a river rock; clipped in, I tumbled in, relieved to have protected my arm from further trauma. I remounted and cycled happily on, only to realise some five k’s down the track that my ‘phone was in my (non-waterproof) waist bag. Well, apparently the Galaxy S3 is not waterproof either (I have since discovered that all the photos that I took with it on this day are no more – and the repair was not cheap either).

My eventual arrival at the lovely Doornkloof camp was met by encouraging (I think) cheers from the already-showered, relaxed party of riders. But I had enjoyed the day. It was only the second time that I had cycled such a distance in one session (the other occasion was in December). And I was relieved to have survived on one arm and not come a cropper on the steep downhills. It could only get better.

This would prove to be a warm and difficult day. The road climbed steadily over most of the distance, up Nuwekloof pass, and when it eventually levelled off a fresh, westerly headwind tested our resolve. 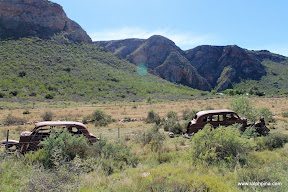 The pattern was now set, I realised. A group of riders were out to get from A to B in the minimum possible time. It was a race, if not against each other, then against time. Tour organiser Mitzi’s plea that “this is a tour, not a race” was falling on deaf ears, I am afraid.

I was developing a theory about the essential differences between hikers and bike riders. For the former it is about the journey; for the latter about the time taken to the destination. Hikers pride themselves in being self-sufficient and self-supporting; riders travel light and fast and require significant support for re-supply, repairs and spares. The one is an outdoor adventure pastime, the other an outdoor sport, essentially competitive in nature. So shoot me.

I decided to ditch the pannier and only carry the necessary. Self-sufficiency was clearly inappropriate and actually redundant.

With the promise of an even stronger head-on westerly, I resolved to try this riding-in-the-peloton thing. The first one that I joined just outside Willowmore was the really fast group which included my brother-in-law Louis – a “machine” – and Kelson (more about my amigo later) and the “young bloods” (Kelson’s term), Kevin and Johan. After 8 km I realised that the pace would kill me, on this the longest day by distance. When the next group caught me I hung in there for about 30 km and by my GPS was astonished to see that they were maintaining an average of 25+ km/h into the wind, up hill and down dale. After casting off the proverbial “tow-rope” I joined a third group and tagged along to the water point at the 75 km mark. By this time I was “gatvol” and hitched a ride on the support motorbike for some 20km to Klaarwater – the only time on the tour that I “cheated”.

What I had realised was that I prefer to cycle alone. Riding in a group requires too much concentration on the wheel in front of you with the result that you can’t enjoy the surroundings. More experienced riders seem to be able to ride in a peloton and look around – so they say.

Free-wheeling down historic and beautiful Meiringspoort, interrupted by a short walk to the waterfall, was the absolute highlight of the day. Some good footage on the GoPro.

The sky threatened rain, but the wind had abated. Once more I sought out the peloton and chased it around winding farm roads for some 12 km – only to end up where we had started! Some prankster had reversed an arrow sign. 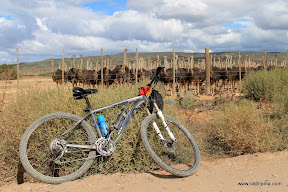 At one point the group suddenly stopped to ask directions of a bunch of farmworkers. True to form, I forgot that I was clipped in and “bought the farm” to the raucous enjoyment of “die volk”. At least I landed on the other arm ….

As we set out again, on the R62 this time, some of the more competitive personalities were exhibiting signs of sense-of-humour failure. We soon turned south to the Olifants River to follow it all the way to Uhuru. The testosterone of the peloton no longer appealed to me, so Mark and I leisurely kept each other pleasant company all the way. I was feeling stronger and cycling was becoming easier.

On this last section I was struck by the number of abandoned and derelict farms. Perhaps it was the recent avian flu scare and the collapse of the ostrich farming industry that had caused all this dereliction. But it is instructive to consider that it has only taken 150 years or less for industrial agricultural practices to wreck most dryland farms and prove to be unsustainable. The Karoo is littered with derelict farms.

We spent a rest day at Uhuru guest farm and its pleasant campsite, cropped by small herds of zebra and springbok. But the caged, exotic primates and parrots were distressing to observe.

Other than the first day in the Baviaanskloof, this was probably the most beautiful day of the tour. In crystal-clear, windless conditions we climbed Rooiberg Pass, 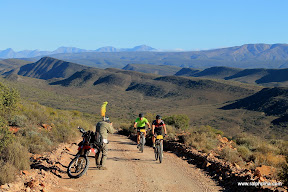 an old packed-stone wall road that zigzags up the range that separates the valleys of the Gamka and Groot rivers. The short, sharp climb was rewarded with a long, hair-raising descent to Vanwyksdorp. On some of the hairpins skid marks betrayed frantic braking by some of the racers ahead. It was a glorious day, made complete by the best campsite of the whole tour, situated on the banks of the Groot River.

Another pristine day etched the blue Langeberge in sharp relief against the sky. The dirt road undulated across the drainage lines from the berg. There were a couple of fast, sweeping downhills and the breeze stayed over our right shoulders, making for pleasant cycling. I was cycling alone again, enjoying the clear air and carefree hours. I had now become conditioned to long-distance cycling and was feeling strong. 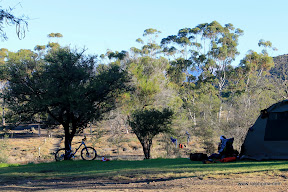 A frostie at Ronnie’s Sex Shop was followed by a languorous afternoon in the spa’s warm waters and pink light dying on the Little Karoo folds. Various ranges are visible from Warmwaterberg Spa’s stoep: Anysberg, Klein Swartberge with Towerkop standing proud, Swartberg, Rooiberg and the Langeberg.

Originally we would have cycled from Vanwyksdorp to Anysberg, but the campsites at Anysberg were unavailable because of refurbishment.

The spa waters resulted in some lazy legs that would suffer a bit later in the morning during the long climb up the back of Ouberg. Once more it was a beautiful Karoo morning. The road to Montagu passes through Sanbona Wildlife Reserve and the rangers warned of  elephant and lions along the road, so for safety’s sake we had to board the trucks and bakkies with our bikes for about 10 kms. We saw the elephant breeding herd, but not the lions.

Ouberg Pass offers an exhilarating downhill. Although the road surface is good, braking problems could easily have you flirting with the precipice. My suspect arm and the “hard tail” meant that I had to be a little cautious on the sinuous descent, but it was a rush nevertheless.

And then it was over. By lunch time. Had I also been “racing”? No, I decided that the long Ouberg descent was the culprit. 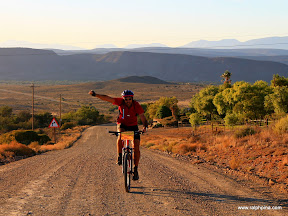 Oh yes, about my normally laid-back Brazilian bra, Kelson … I had invited him on the tour. When I realised that my arm was not about to recover in time for the tour and was a bit apprehensive, I emailed him to check that we would help each other to “survive”, ride together (he had also had a bad fall some weeks before mine). Silence. Most unlike the man. Puzzling silence until we met to leave on the truck to Komdomo. After day 1 I realised what was up: the bugger had been training like a dervish and was super-fit. He was out to beat them all. A “challenge” he called it. So we saw each other at breakfast and after each day’s ride, seldom if ever on the road. A rather amusing ambush …. 🙂

My relatively unsophisticated commuter bike, a Momsen AL329 “twenty-niner”, never gave a moment’s trouble. There were no breakdowns and the “slick”, non-tubeless tires had no flats. There’s a message in there somewhere …

Kudos to Mitzi and Louis for organising a fantastic adventure so well. Sophie dished up tasty, filling food and Dumi worked his ass off pitching and striking our tents, plus navigating that monster truck around some tricky obstacles. The riders were a great bunch of people who all came through relatively unscathed, save for the odd boil on the bum. Mitzi owns Makadas Adventures and this tour was a dry run for the new Karoo Tour product. Highly recommended. And remember …. it’s not a race; it’s a tour!

A final plea to the organisers, Makadas: don’t turn it into an elitist tour where only the people who average 25+ km/h on the stages can participate. Keep it so that all levels of cyclists can ride, and perhaps recognise that a 15 km/h average speed and lots of sightseeing stops are acceptable.

Photos by the pros: 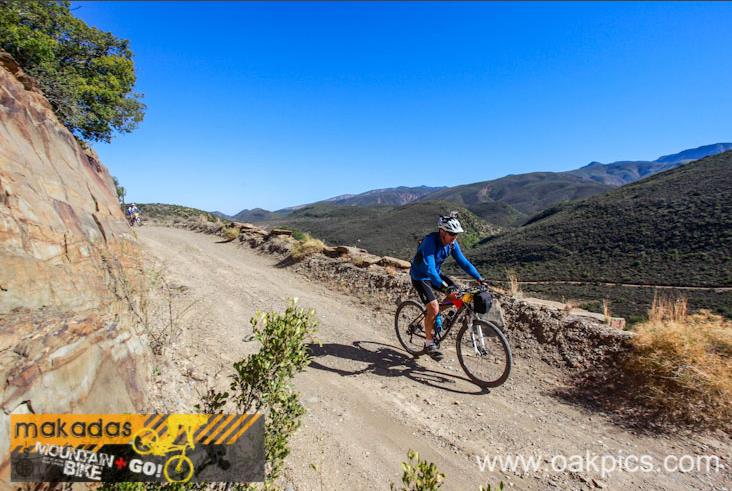 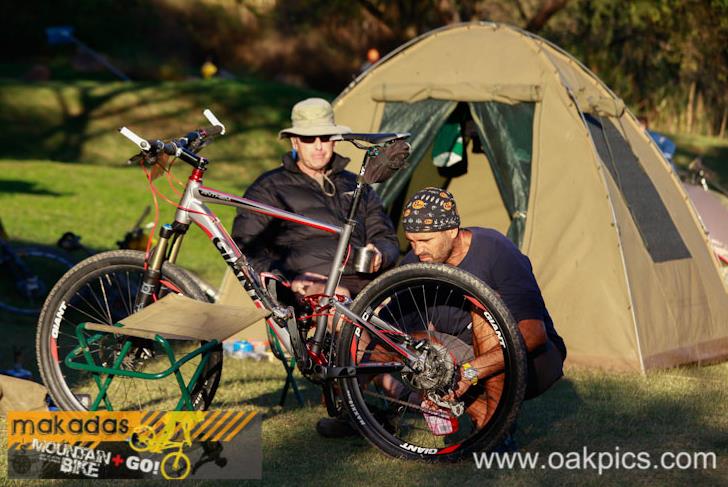