Ah man – those were idyllic days on the backroads of the Baviaanskloof, Karoo and Little Karoo. I left my legs 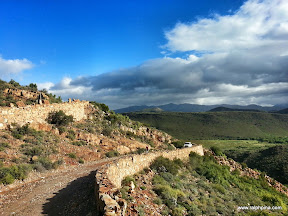 on Rooiberg Pass and my mind somewhere between Bruintjieskraal and Montagu. But it almost didn’t happen. Makadas Adventures’ tour was to be a repeat of the inaugural 2013 one but for various reasons the take-up was poor and a month before the scheduled departure, it was cancelled. Some of us had been so looking forward to it as an antidote to the nagging discontent at work that we were not prepared to see the tour die – so we replanned it as a private tour with our own arrangements, gear, catering and vehicle and trailer. It worked brilliantly.

You may be forgiven, after watching the video (below), for thinking that we freewheeled downhill for the bulk of the almost 400 km. In fact we climbed through 6546 m and descended 5934 m on a cumulative basis. The nett elevation gain was 612 m. It would have been more but for the fact that we drove to the top of Ouberg on the last day to enjoy the fast, long giant slalom to Montagu. The weather could not have been better and we presciently chose our rest day to coincide with the day that the cold front passed through.

The video will not play on mobile devices because of copyrighted content.

Amazingly there was only one puncture and one fall – on the last low-water crossing but three on the last day, when Anna-Mari hit a pothole in the concrete. Jan and Anna-Mari planned and organised the catering and cooked up a storm. I think this was the first time that Susan was driving a bakkie (pick-up) and trailer as the support crew and her baptism of fire, on the first day for good measure, was to negotiate the Baviaanskloof passes and their ropy roads. She passed with flying colours and had a whale of a time.

Or download the kmz file and view in Google Earth where you can see profiles and the 3D route. It also contains a canned tour.