A round-trip drive of 1700 km is a long way to go for a weekend hike. It would have to be really special to justify the travel I argued, especially in the face of Marion’s barely-concealed disapproval. 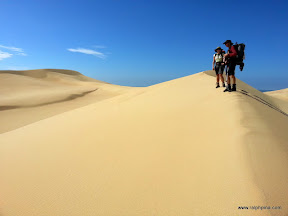 Doubts loomed when Chris reported that his tendonitis could prevent him walking, and I detected in Santie’s Friday instant-message to enquire about my location that she was concerned that we would not make an appearance. Anyway Chris and I disregarded our spouses’ “advice” (this is generally recommended when it comes to matters of travel and adventure), picked up Santie at St Francis and headed for Kenton-on-Sea, a village that straddles the Bushman’s River mouth.

Our pre-hike accommodation at River Roost, a  well-appointed wooden cottage buried in the riverine bush above the river, immediately impressed us, the braai-ed steak was tender and the wine and the company were good. Things were looking up. On arrival the next day at the Langebos forest station we were a little surprised, and pleased,  to observe that we were the only people on trail, despite the hut there, which serves as pre-trail accommodation, having ostensibly been fully booked. Over the duration of the trail it became clear that nobody had been on the trail for a while – no spoor. The Alexandria Hiking Trail is unique in that it features three distinct environments: high indigenous forest that contains some old Outeniqua yellowwoods, desert-like dunes reminiscent of those found in the Namib, and a seashore comprising expansive, fine sand beaches and crumbling sea cliffs. The trail opened in 1985 when the area was known as the Alexandria State Forest. Later the Woody Cape Nature Reserve was proclaimed and in 2002 SANParks became the area’s custodian when it was 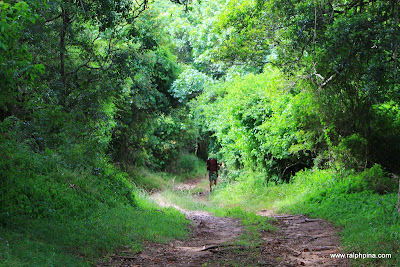 incorporated into the extended Addo Elephant National Park. This progression in proclamation represents steadily increasing security as a protected area.

Day 1: 20.9 km: The trail follows old forestry tracks as it winds down through the forest. Although the day was humid, the woods provided welcome shade and coolness. Spider webs spanned the path at frequent intervals – invisible, sticky curtains – and were simply more evidence that nobody had passed this way recently. Chris’ and my cunning plan was to let Santie break trail so that we could follow unhindered and initially she treated the webs and their owners with careful respect, but later she wielded a stick like a swordswoman to part them unceremoniously.

When we reached the beach, we thought that the back of the day’s trail had been broken. In the distance we could see the cliffs, the guide booklet said 6 km of coastline to go and it was beautifully windless, an unusual occurrence in 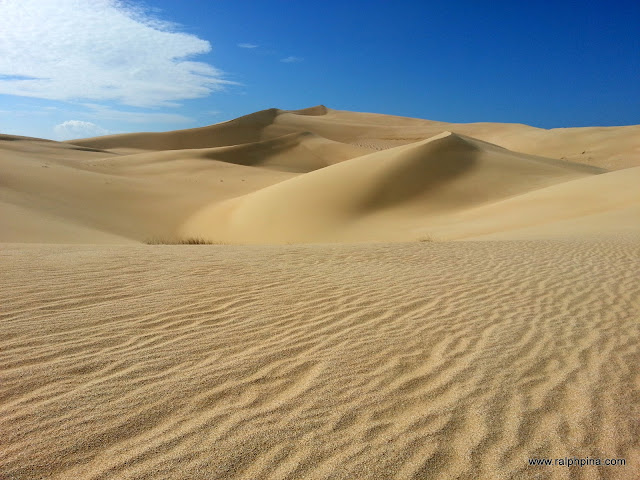 these parts. However, the cliffs that we estimated to be about 1 km distant proved to be 4 km away. Then the stony shoreline below the cliffs made walking a little awkward before a rope ladder made for a rather tiring ascent of the cliff. At the top the dunes rose shimmering to the north and west. We followed Santie and she very nearly led us to the top of the highest dune in the dune field (we confirmed that on the map) before we realised that staying on the cliff edge was the recommended way. From there a sandy path through the dune veld made for a hot and weary slog into the sinking sun.

The guide booklet estimates day 1 as 18.5 km and some websites claim 19.5 km but my GPS read 20.9 km. We were glad to stumble into the Woody Cape hut – and remember, Santie and I are pretty well-conditioned hikers. The hut is beautifully located in dune forest above the cliff and on the southern aspect of a wooded dune, commanding great views from the deck up and down the coast and out to Bird Island. No man-made lights are visible from there, except the island lighthouse’s some 8.5 km out to sea and those of passing ships. A very special place. The reason for Santie’s heavy pack was revealed at dinner: wet rations! A bottle of white wine (!), mushrooms, a green pepper, etc. Respect. What a tasty pasta we had. We slept out on the deck under the stars. 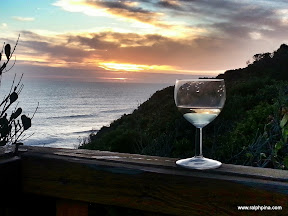 We headed into the remarkable dune field. I won’t try and describe this landscape but will rather let the photos do the talking. From the trail’s informative booklet:

“the dune field is the country’s best example of a bare coastal dune field, often referred to as a dune sea. It is the largest and least degraded coastal dune field in the southern hemisphere. [It is] … over 80 km in length, with a width of up to 5 km in places. The dune system is extremely dynamic with sand being continually blown in, building up and traversing inland.”

Following some initial full frontal assaults on the dunes we figured out that more circuitous, sinuous routes represented the path of least resistance. At the ridges we would pause to spot the next trail marker (I idly wondered how deep they are planted in the moving sands) and then survey a route to its vicinity. In the morning there were many kudu tracks as it seems that the antelope head out across the dunes from the forest to the bushy “island” that is Woody Cape at night to return to the trees in the early morning. Why? Salt licks? I don’t know. After the “desert crossing”, we traversed some farmland before heading back through a different part of the forest.

Total distance: 35 km. So, was it worth the travel? Yes – unequivocally. A unique landscape and great company.


The slideshow will not render on some devices, so go to the album.