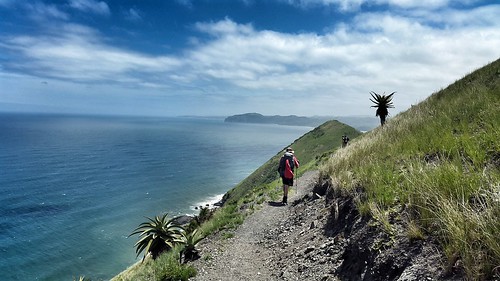 featuring overnight stays at local homesteads, is one of those must-do hikes. Besides moving through the unfolding spectacle of the shoreline you will gain some insight into a fast-disappearing way of life. The trail crosses many river estuaries and at least four of them require a ferry.

Despite its verdant beauty and the absence of overt industrial development, one cannot escape the sense that the name ¨Wild Coast¨ is a bit of a misnomer. The name evokes untrammelled wilderness, but this coast has been home to the Mpondo people, supporting their pastoral and agricultural society, for centuries. There are pockets of indigenous forest, mostly in the valleys, but all the rolling hills are cattle pastures – grasslands – crowned by traditional homesteads and hamlets. What wildlife that is left is restricted to two small nature reserves and one marine protected area (MPA). By contrast dolphins and whales roam freely at sea. Although the locals have always gathered and fished from the shoreline, harbours and fishing boats are largely absent. On other coastal trails in South Africa, the re-emergence of pairs of black oystercatchers every kilometre or so is noticeable and heartening, but on this coast we saw not even one. 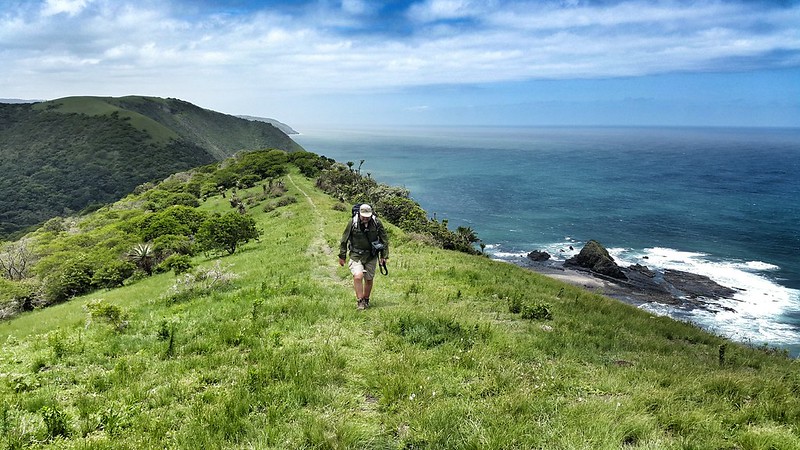 Although the coast is not ¨wild¨ in the ¨wilderness¨ sense, centuries of human activity and presence should not detract from its charm. Walking the coast and accepting

the hospitality of the locals takes one back in time to a feudal-like society, where people with so little to share are proud to share it. In fact, one should feel compelled to hike the coast with a local guide and to use traditional lodgings. The experience will make you humble and open your eyes to how rural, fellow South Africans live. Their society is not to be pitied or disparaged; perhaps it is they who are wealthy and we who are poor. It is a hard life however, where most daily endeavours revolve around providing shelter and food. Picture yourself completing the day´s hike, hot and sweaty from the humidity, and being treated to a warm, pleasant bucket shower, only to observe the hostess or her daughter returning from some distant rainwater tank or tap balancing litres of water on her head (drinking the river water is not recommended). The same fire that cooks your food warms the water, its firewood gathered from steadily receding forests. (At some homesteads Eskom´s power lines have been connected, however. Electrification of the coast is underway, but I idly wondered about the logistics and planning for this project in an area with no spatial logic or plan, where line routes and endpoints are completely determined by topography. Interestingly, we saw no sign of solar PV deployment while solar water heating is impractical because of the lack of piped water to homes.) 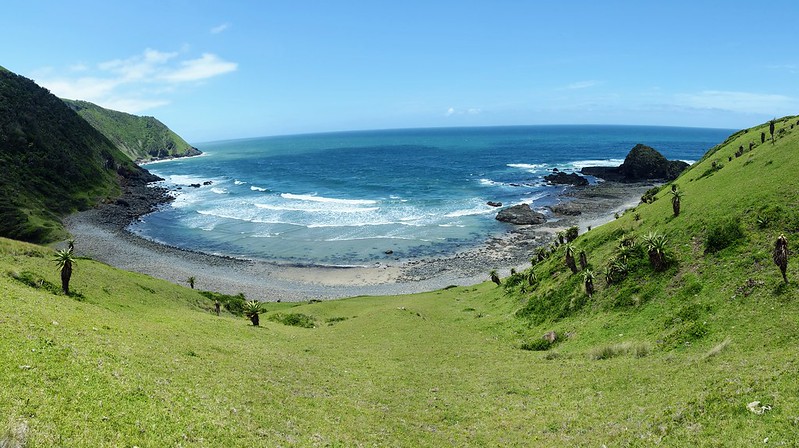 The illusion of experiencing a different century is enhanced by the evening sounds at most of the homesteads. The modern cacophony of radios, TVs, car noises, alarms, etc. is totally absent. Only the sounds of domestic animals, cattle and goats, birds, the surf and the voices of people are carried on the breeze. 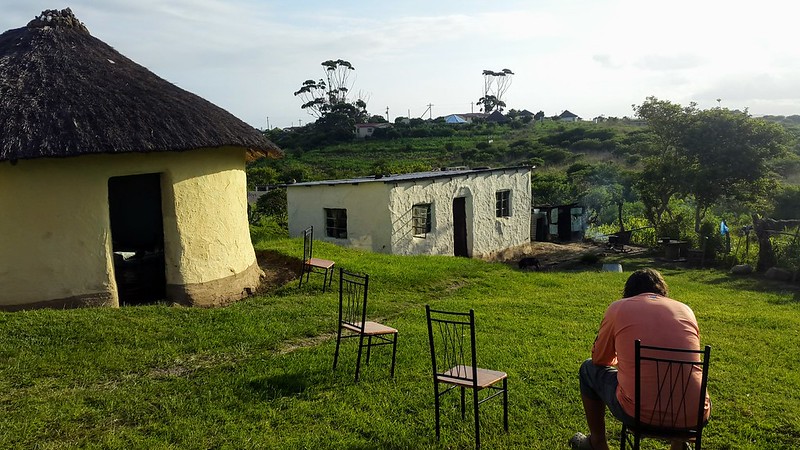 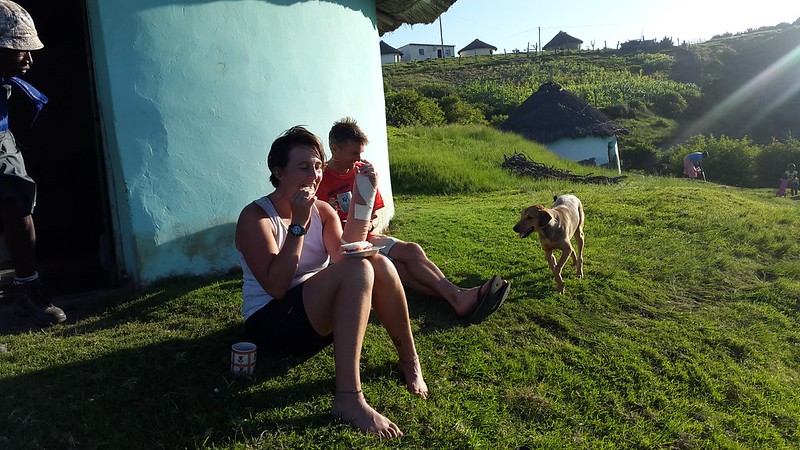 Hiking companions often determine a trail´s enjoyment and memorability. Old friends, Chris and Peter (it was his idea), were my companions. Except for some initial altercations around anticipated, imagined and actual snoring, we had a fun time, not least because we share similar environmental ethics and interests – and a sense of humour. And then there was Hunter, a roller derby jammer from the Channel islands with an English litt degree, not to mention a fractured wrist, halfway through a six-month adventure in South Africa. She made for very interesting company.

The richness of the experience was enhanced by the characters that one meets, such as our humble hosts and hostesses – Peter, Khuleka, Gretha, and others – for whom nothing is too much trouble. Our guide Sisa kept us moving, negotiated with the locals and imparted interesting information about the place. He has an infectious giggle and a ready grin, and an intellectual manner. His greatest concern was to reach certain river mouths at low tide and I suppose that some could be challenging, especially given the propensity of the Zambezi shark to patrol the shallows. Sipho, a one-time guide and now lifesaver at Hluleka, recounted how he prevented some alcohol-fuelled locals from attempting to swim ¨to America”. The telling of it was very funny. At our most spectacularly-sited overnight rondavel we happened upon Brother G, helping out at Mashomani´s, a white, Afrikaans-Dutch bohemian who has found his niche on this coast and was enjoyable company. 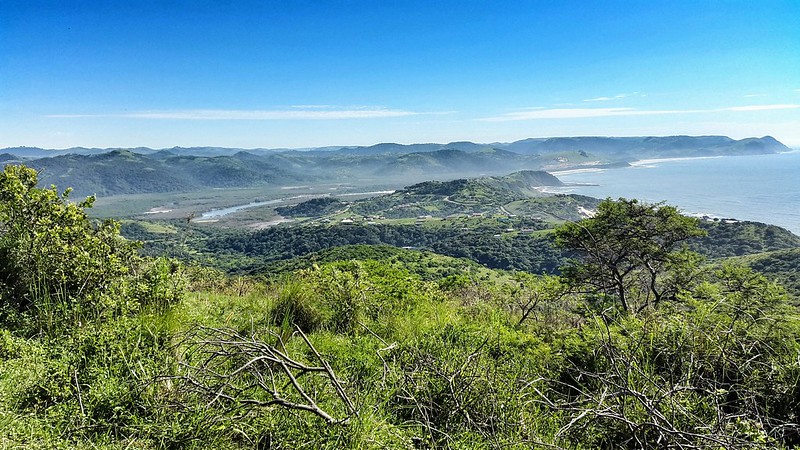 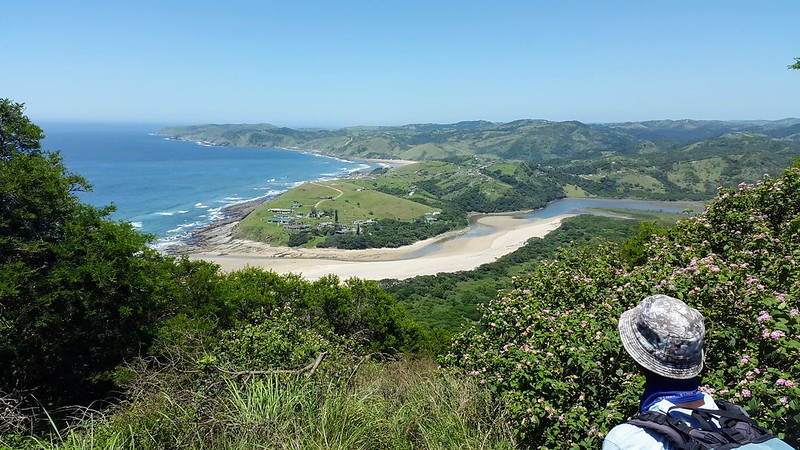 Earlier I alluded to a disappearing way of life. The most visible – and jarring – sign is the tsunami of plastic and plastic packaging that originates at shebeens and spaza shops and finds its way into rivers and estuaries. The locals have no responsible way of disposing of it. Similarly the beaches are awash with the plastic detritus of our modern, plastic world, brought to these shores by prevailing winds and ocean currents. Plastic bottles dominate, but buckets, crates and sandals are recurrent items. It is a common sight on every coastal trail and sea kayaking trip that I have done, and the problem is worsening.

The sad irony is that plastic bottles and buckets are really useful containers for poor people who are compelled to transport water from tank, stream or tap to their homes, but the fact is that they are so common and so cheap that they are not worth re-using. Contrast this case with that of the quart-sized, glass beer bottle which is the standard dispenser of beer that is trucked to these remote shebeens. The beer bottles are carefully collected and returned to the shebeens for the small monetary deposit. They have value. I think that it is criminally irresponsible of corporations to foist plastic packaging on poor communities without sorting the downstream economics and waste disposal systems first. 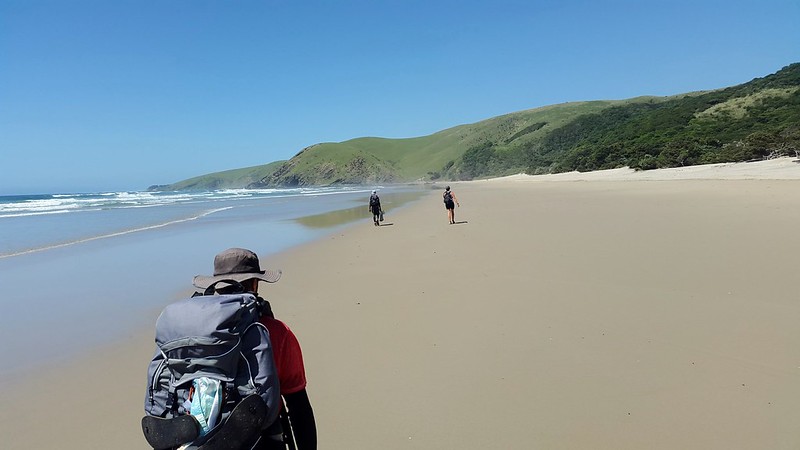 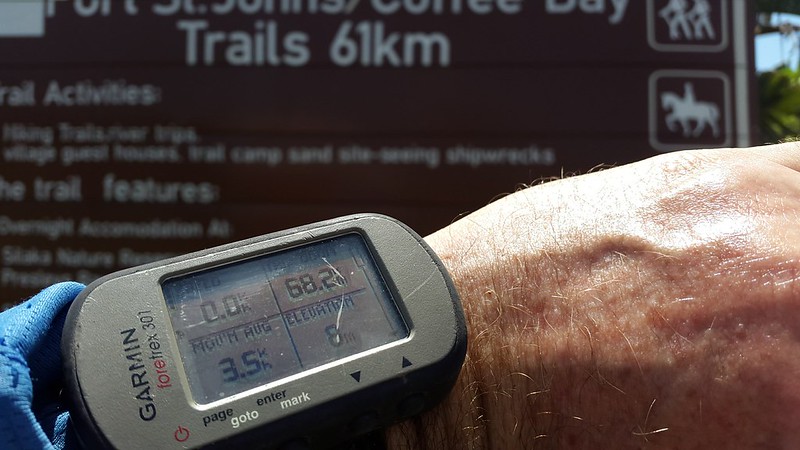 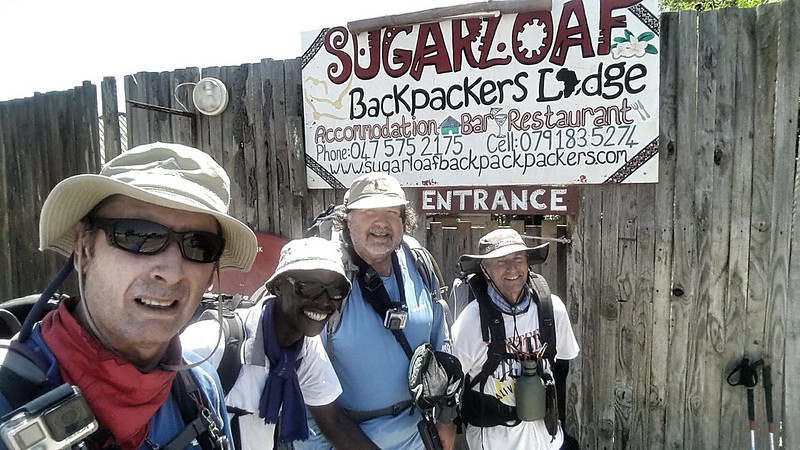 Jimmy Selani, the managing director of Wild Tours and Hikes, makes all the arrangements with the locals and the ferrymen, and provides a Xhosa guide, if he himself does not guide it. His services are highly recommended. You will however have to arrange your own logistics to and from Coffee Bay and Port St Johns, as well as accommodation there.

Here’s an interesting read about the name “Wild Coast” and the shipwrecks along the coast.