(All photos by Santie Gouws)

There were 8 of us, 6 cyclists and 2 drivers of the support vehicles, 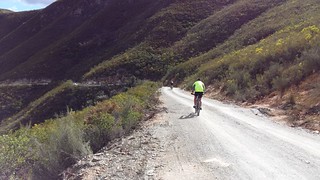 Ralph’s old staatmaker Toyota Hilux and Magriet’s VW Tiguan. All of us, except Marion, Ralph’s wife, had done the trip before, so much was the anticipation of another spectacular week of cycling through one of South Africa’s truly remote and wild places.
Our trip started with us camping overnight at the Eagle Falls guest farm in the Kammanassie valley. Tents were pitched and braaing time came and we soon realized that apart from literally going off-grid in terms of not having cellphone signal in the kloof, we would also be off-grid in terms of braaiing, since the essential toeklap rooster had been left at home – guilty parties will not be named for their own protection. Luckily this is South Africa and we could borrow a grid at Eagle Falls.

‘Kammanassie’ is the Khoi San word for ‘mountains of water’ and boy oh boy did we get a first-hand experience of that. I had a small, read minute, orange K-way 1-man hiking tent, but it proved its worth that evening when a thunderstorm of note broke loose overhead. Thunder, lightning, heavy rain thrashing and a wild wind shaking the K-way, but not a drop of water came through as I emerged fresh as a daisy the next morning. This was to be the first day of our cycle tour – Kammanassie through Baviaans.

After setting out through the beautiful Kammanassie valley in the rain, we aimed directly for Uniondale to source said grid in real-time. It being Sunday afternoon in the Karoo meant the exercise was slightly futile as only the local Spar was open, and that did not sell braai grids. After quite a hard cycle on the only tar our tires would see in a week, that evening was spent at the luxurious Vetvlei guest farm, north of Uniondale. Luckily for the unmentioned individual, a grid was supplied and our usual evening braai could continue unhampered. Vetvlei is something to behold. Imagine a Karoo farm house with a broad old stoep and a large fully-fitted kitchen, on a remote Karoo farm with karoo bossies and a dam in front of the house and a small hill beyond. A full moon, later in the evening another thunderstorm and a beautiful breakfast served the next morning rounds off the picture. We were ready as can be for day two. 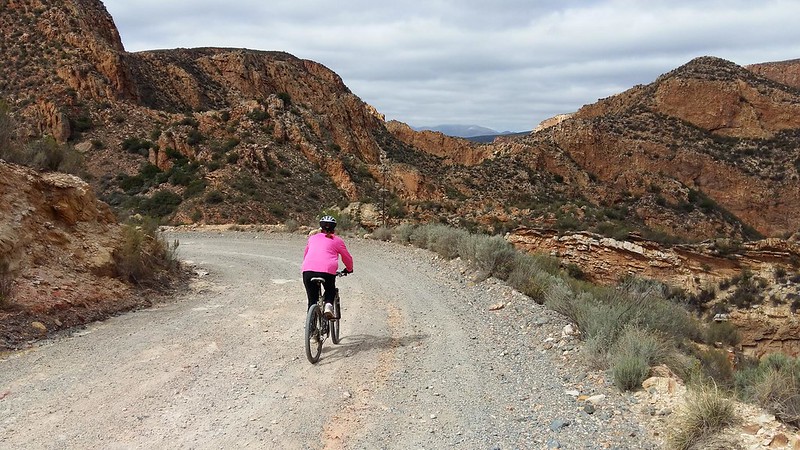 The next morning a small posse broke off the main group and returned to Uniondale for another grid search. From the Ko-op, back to the Spar, to the local slaghuis we went without any luck. Just before we were ready to proclaim Uniondale officially off-grid and straightforward backward, we tried our last avenue – a small second-hand shop in Kruger Street – and, low and behold, no, they did not sell grids, but the owner had the honour of the town to consider and decided to GIVE us a braai grid from his personal stock at home. The day saved we cycled on to our next overnight stop, the spectacular Kouga View Game Lodge.

When Ralph first described Kouga View, he said we would be sleeping in a backpacker’s dormitory with bunk beds. Having travelled some in Africa and Europe, I had a certain set picture in my mind of what this could be like, but Kouga View was nothing of the kind. At R300 per person per night I can really describe this again as being ‘luxurious’. Yes, there were two rooms for sleeping, one for the ladies and one for the gents, but it was more like a large sharing guesthouse room than a dormitory. The place had a chef’s kitchen and a lapa that could seat 60 people easily. A wonderful pool next to the bush and some kudu passing by just outside a small fence, situated in a beautiful remote Karoo valley, all just for the 8 of us. To top it all, the owner offered to take us on a sunset game drive of the rest of the farm and we saw zebra, buffalo, giraffe and eland, all included in our R300’s. 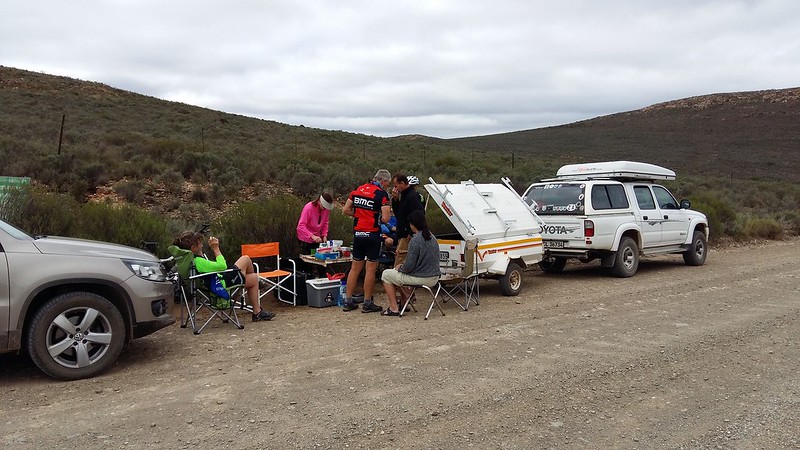 After a hearty breakfast of muesli and eggs and toast the next morning, we all set off for our day of entry into Baviaanskloof. A slow grinding 20km uphill through the upper Baviaanskloof Karoo landscape started off the cycling for the day. Then came tea-time. Now tea-time was always something special. We would stop, take out camping chairs and tables, gas stove and all the rest of the coffee and tea-making paraphernalia along with a yellow and red heavy-bottomed metal teapot for boiling water, and pitch a small tea-camp right next to the gravel road, next to the vehicles and take a proper break. This became a daily communal ritual which I now miss as I sit writing this. This was the time of making jokes and telling stories, refreshing the body with some nice eats from Magriet’s trommels and having a first and second cup of tea. Eventually, after packing everything back into the vehicles and trailer we headed off again.

Now I have to underline this next statement: the Baviaanskloof is majestically spectacular. It truly is. And experiencing it on a bicycle is probably the best way in which to do it. The orange brown cliff faces, the winding road, the canyon-likeness with a river running through it, the wildness of the place, the mountain passes and gorges, the bush, it all makes for some fantastic cycling. And so we entered the kloof and its majestic surroundings on day three of our trip, cycling down the spectacular Nuwekloof pass and on to our next stop, Duiwekloof. 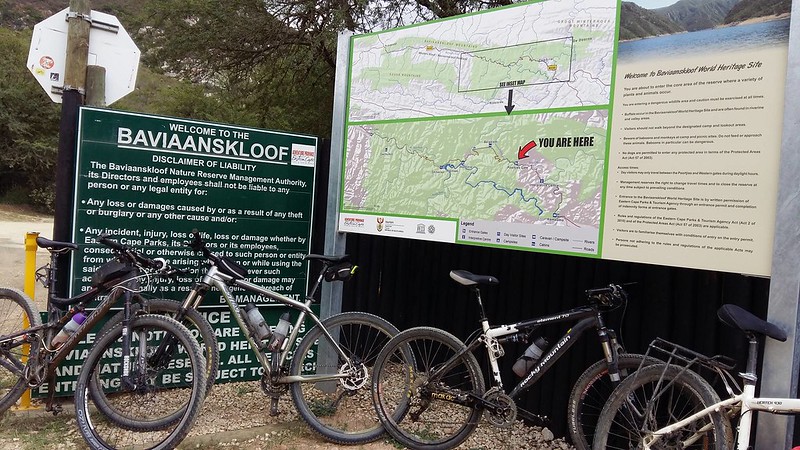 We spent a day of rest at Duiwekloof and did a short hike up onto the ridge and back down. The camp is interesting in its layout with a rock-pool at one end, some self-catering units and camping space with ablutions in between and some decks on the far end with a beautiful view into the kloof. For lunch we went to Vero’s, a small joint next to the road in the Baviaanskloof, for their famous roosterkoek with jam and cheese and yet more tea. That evening it rained again, but the camp has an under roof braai area which we had all to ourselves and what a meal we had: meat, braaibroodjies, butternut roasted in the coals, truly South African and delicious.

For the next three days we would be cycling in the Baviaanskloof. Up two serious mountain passes

and down the other side, and stayed over at Doringfontein, Doodsklip and Komdomo camps. Of the three, Doodsklip is the most remote and basic with only some long-drop latrines and the river for washing. We had some more rain here, and a beautiful rainbow spanned the sky as we sat huddled under a gazebo. I tried to pitch the K-way during a break in the rain, but no such luck and eventually the entire inner of the tent was completely soaked. Later when it dried up, I managed to dry it out with just a towel and pitched the still wet tent. Here the tent really earned my respect when by the evening it had dried out satisfactorily enough that I could sleep in it. The next morning we had some monkeys for company and after another hearty breakfast we set off for the passes.

Baviaanskloof is a most magical and wild place with ever the hidden presence of buffalo and kudu. We will surely be back. 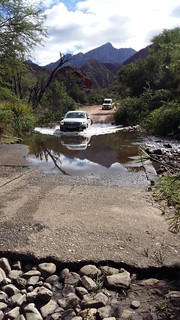