The Whale Trail in the pandemic

As South Africa emerged from the hard lockdown in mid-2020, I became desperate to escape to the outdoors. On the off-chance that the Whale Trail was open, I contacted Cape Nature and easily obtained a booking for the trail in January 2021. The hugely popular trail was opening for the new year and the lockdown had apparently been well exploited to refurbish and upgrade the trail cottages (“huts” is not an appropriate term for these beautiful accommodations). I gathered together a group of 5 equally-desperate hiking friends and we were all set.

Then in December the pandemic’s second wave gathered steam and I began to fear that the trail would be closed. When Cape Nature called I thought the worst, but they told me that they needed to split the booking to meet the 50% accommodation rule – another group of 6 had booked before us and we were given a couple of alternative departure dates. I chose a date two days earlier than the original date. However, I found this rather strange. Originally when I booked it seemed clear that I could book 6 or 12 people, and only when I tried to increase the size of the group a while later, having been inundated with requests to join, it transpired that another group had booked the other 6 slots. Secondly, on reviewing Cape Nature’s notices and marketing, when they had announced the re-opening of the trail, they had been clear about the 50% rule. So, how was it possible that they booked 12 – full capacity – on the trail at the outset? Anyway, we were grateful to have a booking and left it at that – although the change of date upended Chris’ participation.

As we prepared for departure the government announced the closure of beaches and all kinds of restrictions, but it seemed that the trail would remain open – although in our briefing at at Potberg, the trail manager did warn us that it could be terminated at any time while we were on trail. The next day, however, we pinned back our ears, shut out thoughts of the virus, and headed up Potberg. Fortunately, our idyll continued uninterrupted for the full 5 days. We were probably the only people to be on a beach and swim in the Western Cape – three-fifths of the trail meanders along the De Hoop’s beautiful coast after all.

For me this trail was characterised by two jarring contradictions: the excellent cottage upgrades (although at some the upgrades detracted from their original characters) and the exponential expansion of invasive alien plants. The upgrades include solar PV-battery systems, fridges with freezers, replacing thatched roofs with metal roofs, aluminium door and window frames, and covered braai lapas. Most are vast improvements and make the trail a more luxurious slackpacking hike, especially the fridges and electric power. Although necessary because of fire risk, the elimination of thatched roofs spoils the characters of Hamerkop and Vaalkrans, in my view. The new lapa at Noetsie is beautiful, although I don’t think its construction materials are up to marine weather assault. The one at Vaalkrans, I feel, overwhelms what is an atmospheric cottage. The less said about the cast-iron firepit hoods, the better, suffice to say they should issue hikers with helmets. Besides being totally ineffective, a few of us brained ourselves regularly on their hard edges. Remove them immediately, I say.

We were also impressed with the trail manager’s passion for his job and his trail. He preceded the trail with a comprehensive briefing (audio-visual aids may help though) and closed it off with a debriefing to collect information about any defects and suggestions. Housekeeping and maintenance seemed to be quietly efficient. Impressive. I hope that Cape Nature is able to maintain the cottages to current standard. 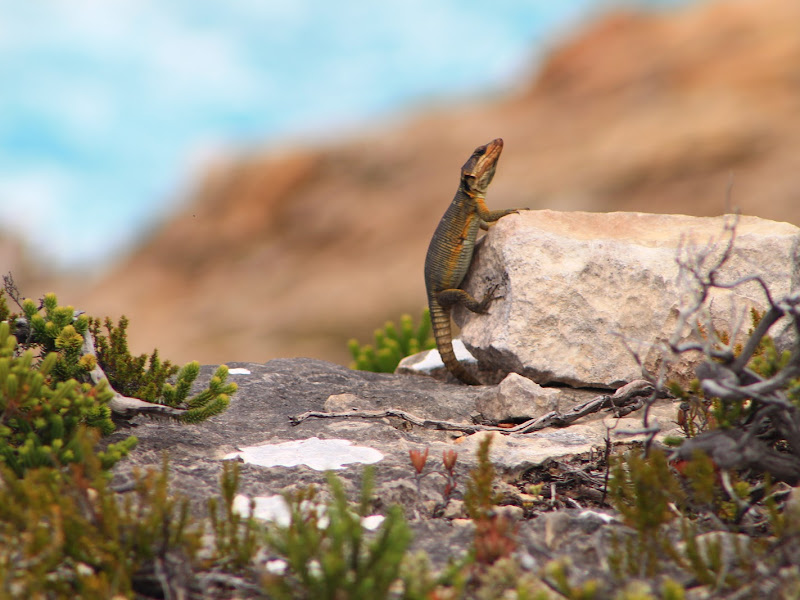 As this was the fourth time I have hiked the trail between 2002 and 2021, what really jarred me is the exponential spread of alien bush, especially Acacia cyclops (rooikrans), over that time. In 2002 aliens were barely noticeable, except in the areas around Potberg, Cupidoskraal and the Klipdrifsfonteinspruit valley crossing; in 2005 the rooikrans was obvious in the Klipdrifsfonteinspruit valley near Noetsie; in 2016 it was infiltrating the limestone cliffs between Noetsie and Hamerkop; now it is almost everywhere along the coast, overwhelming the limestone fynbos in large thickets.

As if to pre-empt the questions of ecologically literate hikers, newish boards announce “biological control” by the Acacia Seed Weevil (Melanterius servulus). Apparently the weevil feeds on the seeds and flowers, lays its eggs in the seeds and the larvae in turn feed on them. They don’t seem to kill the tree however. Consider that rooikrans produces up to 3000 seeds annually per m2! There must be an enormous seed bank in the dunes and cliffs, waiting for the next fire to sweep through.

My eyes suggested that this strategy is not working. I am no invasion biologist, but decided to read up a little about biological control of rooikrans. The weevil was introduced in South Africa at a limited number of sites in 1994, although I am unsure when it was introduced in De Hoop.

Apparently the weevil is an “extremely efficient” biological control agent, although only effective if a very high percentage of the seeds is destroyed. Control of the seed bank, and thus the seed sources, is crucial. But simultaneously the literature suggests that there is no data to support the contention that control of seed production is reducing the spread of rooikrans. My non-scientific observations tend to confirm this.

So what is one to make of this? My own logic tells me that at best the weevil might slow seeding, and thus invasion somewhat, but unless some other factor or intervention kills trees – which in turn can also make the weevil locally extinct – rooikrans will continue to spread. It is possible that successive fires and weevil introductions might turn the tide over a very long time – but fires also stimulate spread. And how long is a “long time”? Will the diverse fynbos species and the ecological processes that maintain them, survive that long?

According to the trail manager, woodcutters are given concessions to harvest firewood and extract about 5000 pieces per day, if I recall correctly. But De Hoop is a big reserve and nowhere along the trail does one see any evidence of wood harvesting, except possibly in the Klipdrifsfonteinspruit valley.

I will probably do the Whale Trail at least once more during my lifetime, but I do not expect to see any reduction of rooikrans footprint. 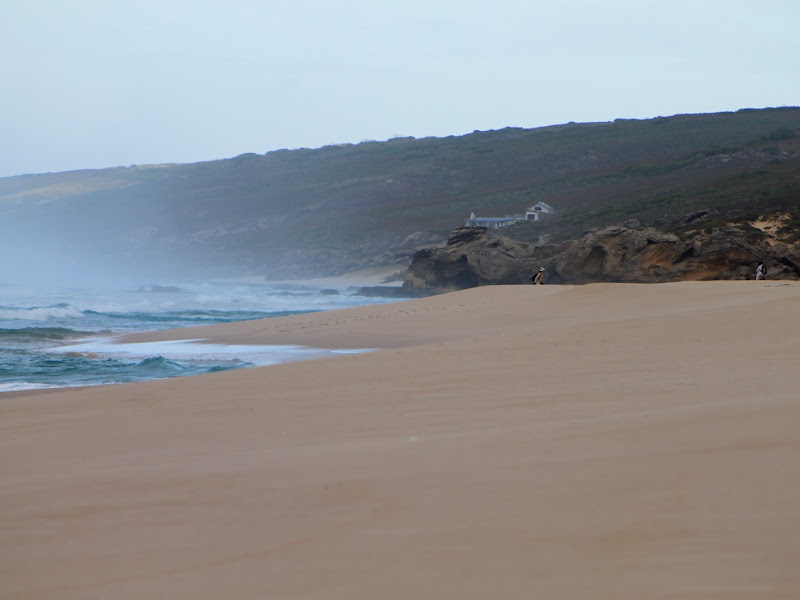 Leaving Hamerkop. Lekkerwater in the distance. 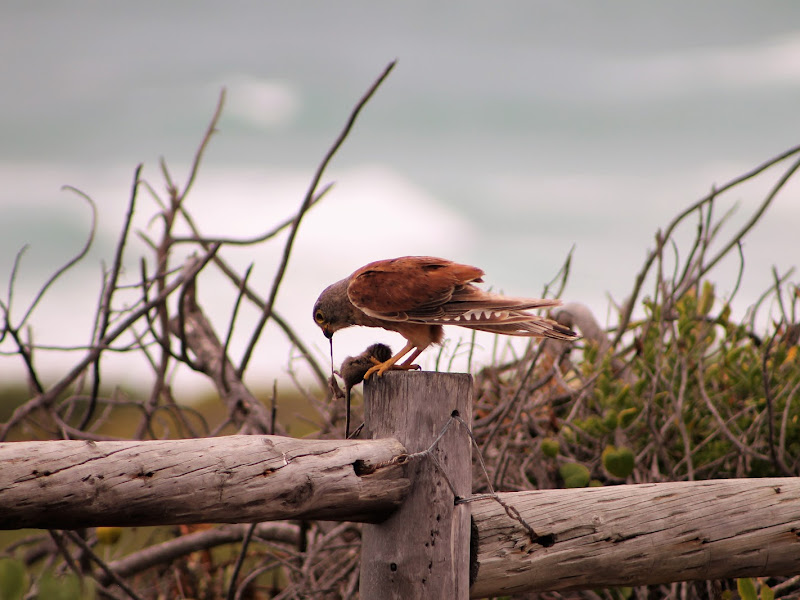 It almost goes without saying that the plastic waste crisis in our oceans is palpable on the beaches and in the coves – and worse than before. The most visible item is the plastic bottle, but when one looks closely, the small plastic fragments in the sand are everywhere. We carried bags and bags of plastic off the beaches. The trail manager provides plastic garbage bags as a small gesture and his team removes it daily from the cottages – I didn’t ask where to. We did come across a contractor at Noetsie who is trying to remove the plastic nurdles that were spilt in Durban some time ago, from the beaches. His team had covered the coast from Koppie Alleen in the preceding days. But oddly, they were only removing nurdles and not all the other plastic trash. Perverse commercial incentives?