The “wilderness trail” is a concept unique to Africa in that it has evolved to imply a walk in the company of a game ranger or conservation officer, usually armed, through big game country. Aspects of the ecology of the area, environmental management and ethics are also explained and the emphasis is often on environmental education. FAQ

The Wolhuter Wilderness Trail is the oldest in the park, established in 1978 in the area frequented by the legendary rangers, Harry and Henry Wolhuter. The trail camp lies about 10 km north-west of Berg-en-dal restcamp, in the transition zone between the mixed bushwillow woodlands and the Malelane mountain bushveld – white rhino country.  And did we bump into a few of them… 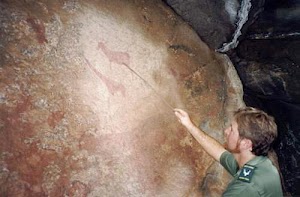 On the rough drive to the camp on the Wednesday evening, we spotted lion, an elephant bull in musth and two white rhino, all at very close range. It seems that because no humans had been on these roads since the rains and floods, the animals had reclaimed the area. Ours was the only trail running in the park, and the first since the floods, thanks to the passion and determination of our trail ranger, Jan Erasmus. 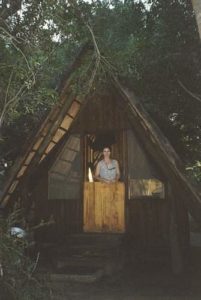 Marion and the hut

He was worried because heavy cloud predominated, and the last group had to be lifted out by helicopter as the waters flowed through the camp.  The bosses were going to have none of that again.

Thursday 2 March
Usually the morning walk commences before sunrise, but drizzle and distant thunder delayed our departure. The grass was long and wet and the bush more luxuriant than I had ever seen it.

We wound up a granite koppie to perch on an outcrop for a light breakfast. From there the panorama of the bushveld and granite hills spread out below us. In the distance we spotted a herd of buffalo, black shapes amongst the trees of riverine forest. Later we would be surprised at all the animals we couldn’t spot from there, despite powerful binoculars. This area has one leopard to every 3 square km’s, the highest concentration in the park. Needless to say, we never saw one.

On the way down Jan showed us a cave adorned with clear San rock paintings, said to be two millennia old. We then set off to the north-east in order to intercept the buffalo. As we approached a stream, we heard a white rhino greeting behind us. Jan did the recce and then took us two-by-two to view a large, dominant bull wallowing in a pan, some 50m distant. Great care was taken about this, because their bad eyesight, but sharp hearing and sense of smell, makes them curious and bedonderd.

The rangers were impressive, and their professionalism was best illustrated when we exited a stream, and Jan and Kally both suddenly swung their rifles to the right, and cocked, in perfect sync and in one fluid motion. Most of us hadn’t even heard the rustle of undergrowth, but it was a buffalo dagga bull, luckily crossing in the other direction. Exciting times.

But there was so much else to learn about the flora, the micro-fauna such as spiders and frogs, etc., etc., but my poor engineer’s brain couldn’t take it all in, let alone remember. Jan’s scientific and ecological knowledge is impressive to a layperson like me. Additionally, Sean and Carol, two other members of the group, are undergoing field guide training in their spare time, so they added to the mix. Carol’ s particular interest is grasses, Sean’s birds.  “Wonderful!” enthused Elske, our German fellow traveller, on return to camp. It was. After James (Mathebula), the cook’s, tasty brunch and the usual siesta in the humid heat, we set out on a mission to stalk that herd of buffalo. We could hear them to our right, but our path was blocked by a phalanx of white rhino, it seemed. They appeared to be everywhere. Being downwind of them, one approached to within 20m of our position, strategically situated behind boulders and trees. Eventually, Jan had to indulge in a bit of arm-waving to persuade it to move off.

We had just crossed a stream separating us from the herd,  and clambered out of the sandy ditch when we heard it stampede. With the ditch behind us, the unseen herd in front, fear rapidly rose in one’s throat as we all strained to determine the direction of movement. 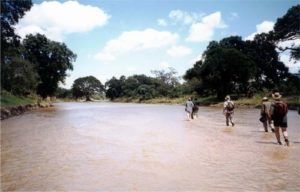 Literally walking in the Mlambane

Being caught down-gallop and downwind of a herd of buffalo is not the preferred place to be. Luckily they thundered across our path about 100m distant. We tracked them for while, parallel to their path, always in visual contact now, but decided not to follow them into thick bush. We could only guess at what had spooked them. “Lion” surmised Jan.

Friday 3 March
Dawn found us on the banks of the Mlambane River (“the hungry river” according to Jan and Kally), contemplating the gap where the low-level bridge had been. Jan had been telling us the previous evening about how he loved to follow rivers, and the decision had been made. We would spend the morning on its banks, following its course east into the rising sun. I doubt whether we realised at that stage that we would be spending a lot of time in it.  African rivers contain bilharzia, crocs and all manner of nasties, don’t they?

But this river was flowing swiftly, 50-75m wide, as pristine as it has ever been, according to Jan, because the floods had flushed it and it rose in the uninhabited Malelane mountains within the park borders. Nowhere was it more than knee-deep, mostly ankle-deep, with a sandy, gravely bottom. Its banks are lined with luxuriant riverine forest of jackalberry and massive figs, amongst other species I’d like to master.

We crossed and recrossed it, spotted two black rhino up on the bank, and came within a couple of metres of a young female bushbuck, frozen with curiosity. “Have you ever seen a buck frown before?” asked Jan. It had obviously never encountered humans before. 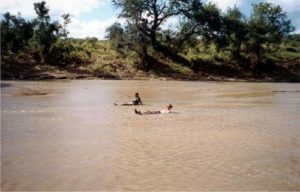 Where are the crocs?

But the real wonder of this day was the sense of wilderness: no humans for miles, the virgin banks scoured by the floods, only the footprints of animals, the only sounds those of the river, birds and insects.

The glare from the white sand made walking hot work, so we regularly lay in the stream, or bumslid down small rapids. Have you ever lay in a wild African river, contemplating the big sky,  a fish eagle, a leaf accelerating down a small rapid? I have.

Chris and Elske, the retired German doctors, would write in the visitors book that this was one of “the best holidays” they had ever had. After this, my second wilderness trail in Kruger, I believe that it is the only way to truly experience the park, absorb the wilderness, be renewed.

On 7-10 June 2000, I was lucky enough to do the The Wolhuter Trail again. Read Peter Groves’ account of another memorable experience.