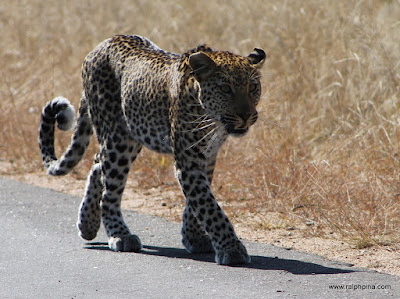 Young leopard near Orpen. It was stalking impala. The rams were snorting at it and mobbing it.

The African bush has been calling for a while, so we packed up and headed 2000 km north-east for Kruger and our favourite means of really experiencing the bush: wilderness walking trails. Our first trail was the Olifants Wilderness Trail, one of Kruger’s seven and one of two that we had not walked as yet. Olifants opened in November 1979, a little over a year after the first wilderness trail, Wolhuter – which is named after a legendary ranger – did.

Olifants trails camp is situated on a bluff on the southern bank of the Olifants River (see the Google Earth track below) a little over 8 kms from the Mozambique border and Limpopo National Park. The thatched huts – 4 for 8 guests – have recently been rebuilt and are a good deal larger than the originals, but the camp still commands great views of the river below and the Lebombo mountains to the east.

Over two days of bliss with trails rangers Aaron and Michael we walked two morning circuits into the bush south and west of the camp, covering 10.9 and 10.6 km respectively, and on the second evening strolled out to the Olifants and Letaba confluence, just before the new river becomes the Rio Elefantes that thunders into the gorge through the Lebombos. It was on the confluence walk that we witnessed the strange behaviour of a young elephant descending the far bank to the river – it was dragging its hind legs flat behind it while walking down on its forelegs, appearing to use the dragging legs as brakes down the steep slope. Maybe it’s not so unusual, but it was a first time for me.

I have written elsewhere about the “wilderness trail experience”, so I won’t bore you again with what it means to us. However, three phenomena got me thinking about humans’ impacts on these wild places, whether the impacts are proximate and direct, or influenced by consumptive behaviour on the other side of the world.  Firstly, Olifants is renowned for its concentrations of crocodiles where its banks would be “carpeted” with crocs, according to Aaron, but you are hard-pressed to spot one these days. In recent years there has been a massive die-off and although research has revealed no definitive cause, it is widely speculated that pollution from upstream industrial and agricultural activities is behind it. 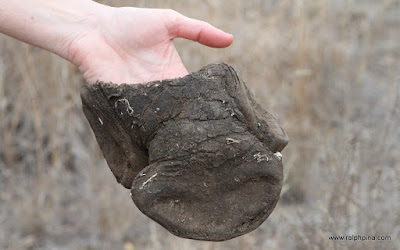 Secondly, Aaron guided us to the site of a recent rhino poaching incident (see Google Earth track). Judging by the state of its teeth, it was an animal in the prime of its life. An ugly, jagged hole in its skull reveals how the horn was hacked out. One hundred and twenty-six rhino have been massacred in Kruger so far this year (333 in 2010) to fuel the demand from China, and lately Vietnam where rhino horn is being touted as a cure for cancer. Since the deployment of troops in Kruger (which I have always thought of as a brilliant idea, as is deploying our navy to protect our fisheries) the killing has gone from 40 in March, through 30 and 15 in April and May respectively, to 2 in June. Of course, the ultimate solution involves destroying Asian demand in some way, but protecting the remnants of the species with everything that we have is the least we can do in the interim.

Aaron claims that whereas he usually saw about 15 rhino on the trail in the course of a month, he might only see 1 in a week now. In one particularly tragic month, they lost 9 rhino. But at least we saw ample dung evidence of white and black rhino on the walks. Everybody is a suspect and it appears that syndicates pose as tourists these days – which may explain the increased security around unattended vehicles at the rest camps.

On an evening game drive we came across a stick of soldiers – “Recces” according to Aaron, but I am not so sure. The effect of military operations on the trail is that all movement by trailists east of the access road in the interesting folds of the Lebombo, has been suspended. Twenty poachers have been shot and killed in Kruger apparently and later at Machampane the talk around the campfire was about how many local Shangaan know someone who has been shot and are keenly aware of the dangers of poaching. This could just be bush legend of course… 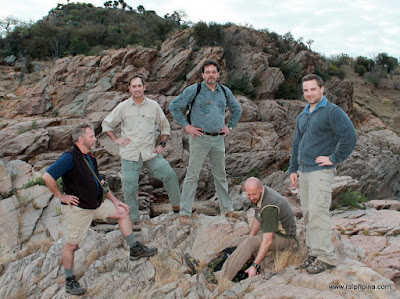 At the confluence of the Olifants & Letaba

While the sources of the previously described impacts emanate from outside the park, the exciting and rare sighting of sable near Machampane Camp as we drove back to Kruger reminded me of the effects of management on the greater Kruger ecosystem. A recent report on the 50-50 TV show explained how artificial waterholes and dams have allowed water-dependent species like impala, wildebeest and zebra to become somewhat ubiquitous at the expense of rarer species such as roan and sable. Kruger is consequently gradually decommissioning artificial waterholes in order to recreate a more diverse mosaic of habitat. I suppose this partially explains why I saw sable near Machampane because Limpopo NP does not have dams and boreholes. In future we hope to see sable and roan more frequently on the Kruger side. 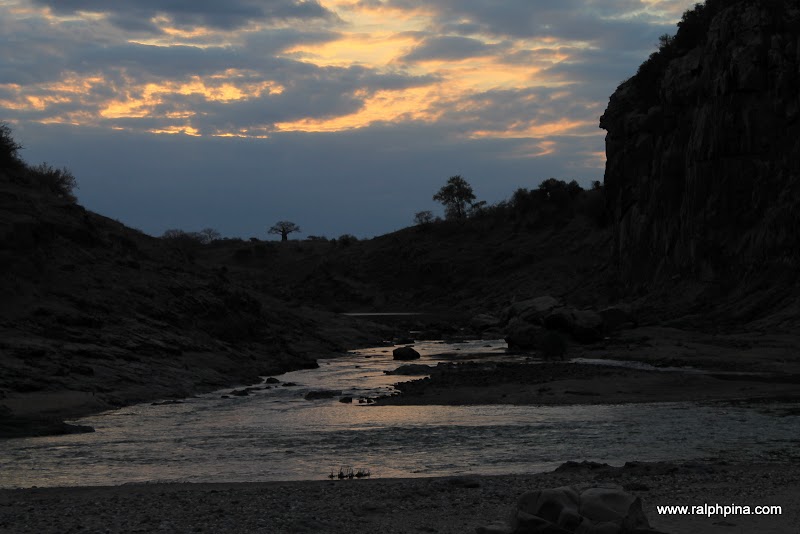 After Olifants we headed for Machampane, which is located only 25 km due north of Olifants trails camp on a tributary of the Rio dos Elefantes, but which requires a drive of some 80km and a border-crossing at Giriyondo. This was our third visit to Machampane which is a special place for us because of its remoteness, silence and location on a deep pool. Unfortunately, it seems to be often used as an overnight stop for 4×4 travellers on the way to and from the Mozambique coast. Unfortunate – because it is a great destination in and of itself and you have to spend a few days there to get a sense of the place. Whereas the Kruger trails are long enough for you to get that I-could-get-used-to-this feeling but short enough to ensure that you will be back (the “perfect product” in my book), Machampane allows you to determine the length of your own stay.

A previous visit is described here. If you compare the length of the trail tracks previously with those above, you will see that our walks were relatively short this time – unfortunately. 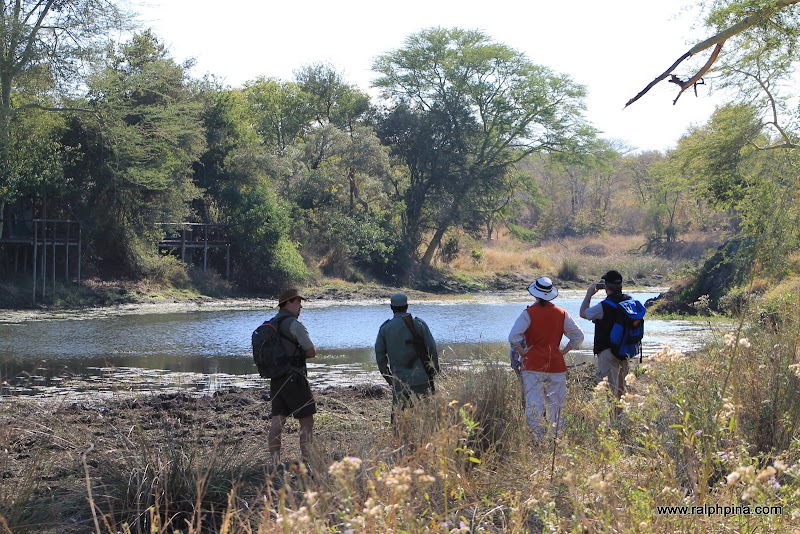 Some sources and reading on rhino poaching: